NASA reports the first Earth-sized Exoplanet in the Habitable Zone

Remember a few days ago, when I was telling you about the big conference NASA had planned for today? Well, they sure didn’t disappoint! The team of astrophysicists from the SETI Institute and NASA’s Ames Research Center have just reported a major milestone: for the first time, they have found an Earth-sized planet at the right distance from its star – right enough to potentially sustain water, in the so-called habitable zone.

“This is a historic discovery,” says Geoff Marcy, an astronomer at the University of California, Berkeley who was not involved in the research, “it’s the best case for a habitable planet yet found.”

The discovery was made using the Kepler telescope, and it crowns a myriad of valuable findings obtained with the device.  The Kepler telescope tracked roughly 150,000 stars in a small patch of sky, searching for stars that dim at regular intervals as planets pass in front of them; Sadly, the telescope is crippled now, but even though it’s not active  astronomers still comb through the data, finding awesome things like this.

The planet, Kepler-186f is almost the same size as the Earth – just 10% bigger. It rotates a red dwarf star (M dwarf), one roughly half the size of our sun, but close enough to compensate for that difference. It orbits its star every 130 days, and inhabits the chillier end of its star’s habitable zone.

“The temperature on the planet is likely cool, similar to dawn or dusk on a spring day,” Marcy says. 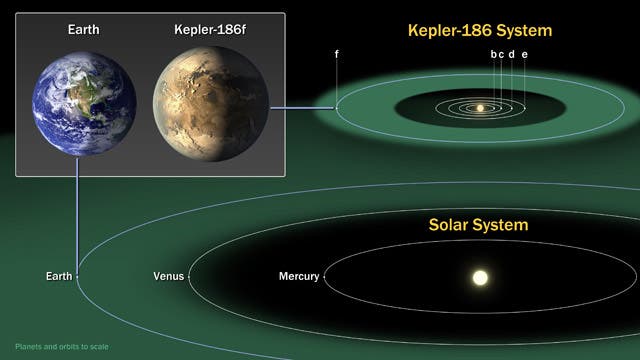 More than 70% of all the planets in the Milky Way Galaxy are red M-dwarfs, and that sheer abundance makes them good targets for uncovering Earth-like planets.

“If we’re going to find any signs of life in the next few decades, it will most likely will be a planet in the habitable zone of an M-dwarf,” says Quintana.

In case you’re not familiar with the term, the habitable zone, colloquially known as the Goldilocks zone, is the area around a star where there is sufficient pressure for planets to support liquid water at their surfaces, and the temperature is just right for water to exist in its liquid form – not evaporating, and not freezing. Life as we know it cannot exist without liquid water.

“We definitely think it’s one step closer to finding a true Sun–Earth analogue,” says study co-author Elisa Quintana, an astronomer at the SETI Institute in Mountain View, California, and at the nearby NASA Ames Research Center in Moffett Field.

It’s different enough to call it a cousin more than a brother, but the two planets definitely have some similarities, but there’s still a lot astrophysicists have to figure out about it. The main argument against life on its surface would be that anything living on Kepler-186f would have to withstand large doses of radiation from its star; to clarify things a little bit: the planet is in the habitable area, which means that might support water, which means that it might have or at least support life.

“We can say it’s probably rocky,” says Tom Barclay, an astrophysicist with the NASA Ames Research Center team. “And because the planet is closer to its star, its days are likely much longer than those on Earth.” As for the planet’s atmosphere, composition, and whether it harbors liquid water, nobody can say. “And it’s important to note that just because this planet is in the habitable zone—that it could support water—that doesn’t mean that it is habitable,” he says.

There are still many variables which come into play, and while astronomers are excited about this, they still have many questions.

“Things have to line up just right,” Coughlin says, “so when we do find something exciting like this planet, that tells us that there’s a lot more out there. We’ve found one, but that means there’s hundreds more.”

Still, while this planet may or may not support life, it’s the best chance we’ve got so far – at leasat outside of our solar system.