NASA cameras have snapped this crazed dusty whirlwind on the surface of the Red Planet. 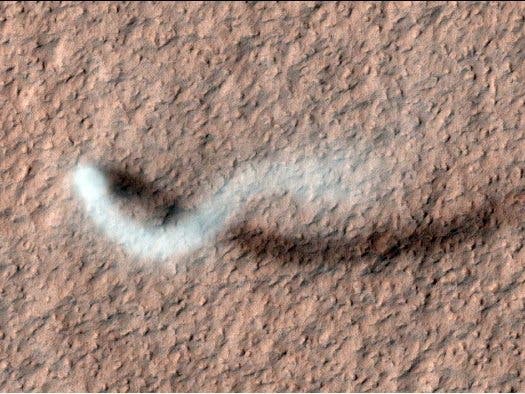 Whenever these whirlwinds occur on Mars, they are called ‘dust devils’, and it’s really easy to see why; at 800m high and 30m wide, with a dusty trail covering an area of more than 600m, it’s strength is just magnificent.

Just like on Earth, dust devils are powered by energy from the Sun, and they come in the form of relatively long-lived whirlwinds, which makes this whirlwind even more impressive, because Mars is in its most coldest period.

Matter of fact, it seemed like just another day for NASA’s Mars Orbiter, which has valiantly been in service since 2006 – but it wasn’t an ordinary day at all, as you can clearly see.