Despite budget cuts, NASA makes plans for deep-space base near the Moon

NASA is trying to push an idea that has been around for quite a while: a “human-tended waypoint” near the far side of the moon, a mission perfect for an international partnership and with a huge scientific value. I really, really recommend going to NASA’s page for a lovely inside scoop. 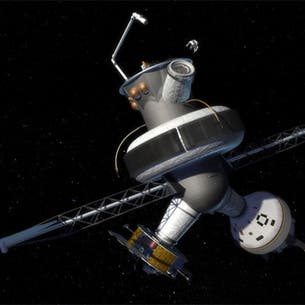 NASA declared that they will soon form a team responsible for creating a cohesive and doable plan with this purpose, as well as finding the Earth-Moon liberation point suitable for this enterprise. The Earth-Moon liberation point is the place in space where the gravity of the two bodies cancel each other out (roughly), basically allowing the spaceship to ‘park’ there.

They have six strategic principles to follow for this operation, according to a memo recently published:
Incorporating significant international participation that leverages current International Space Station partnerships.

U.S. commercial business opportunities to further enhance the space station logistics market with a goal of reducing costs and allowing for private sector innovation.
Multiuse or reusable in-space infrastructure that allows a capability to be developed and reused over time for a variety of exploration destinations.
The application of technologies for near-term applications while focusing research and development of new technologies to reduce costs, improve safety, and increase mission capture over the longer term.
Demonstrated affordability across the project life cycle.
Near-term mission opportunities with a well-defined cadence of compelling missions providing for an incremental buildup of capabilities to perform more complex missions over time.

Of course, as always these days, NASA is aiming for an international partnership which will allow them to do what they cannot on their own. The study is targeted for completion on 31 March this year, and we will then have a clearer idea about what has to be done and the benefits.