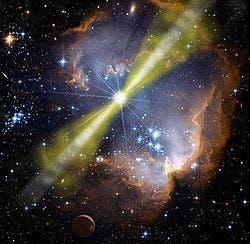 Cosmic rays are basically charged subatomic particles that streak to Earth from deep in outer space. Every once in a while, cosmic rays will have energies about 100 million times greater than any attained by human-made particle colliders, such as CERN’s Large Hadron Collider, and the source of these rays is still a mystery.

“Nature is capable of accelerating elementary particles to macroscopic energies,” said study co-author Francis Halzen at the University of Wisconsin-Madison, principal investigator at the IceCube Neutrino Observatory, a massive telescope designed to find the tiny subatomic particles. “There are basically only two ideas on how she does this — in gravitationally driven particle flows near the supermassive black holes at the centers of active galaxies, and in the collapse of stars to a black hole, seen by astronomers as gamma-ray bursts.”

The prime suspect for these powerful cosmic rays was, of course, a powerful cosmic explosion – mainly gamma ray bursts, which can create in milliseconds as much energy as our Sun creates in billions of years of existence.

But new evidence almost definitely rules out gamma ray bursts from this equation. Researchers employed the IceCube neutrino detector, an array of thousands of detectors encompassing a cubic kilometer of clear Antarctic ice at the South Pole. Neutrinos are ghostly particles that often pass right through matter, only rarely striking atoms.

“This is a coming-of-age for neutrino astronomy — the first time we’re able to use neutrino data as a new way of looking at astrophysical objects and say something substantive about them,” said study co-author Nathan Whitehorn, a physicist at the University of Wisconsin-Madison, who led the recent gamma-ray burst research with Peter Redl of the University of Maryland.

The investigators focused on neutrinos which had an energy level which linked them to gamma ray bursts, and after analyzing data on 307 gamma-ray bursts in 2008 and 2009, the scientists discovered the levels of these neutrinos were at least 3.7 times lower than expected, indicating that these bursts aren’t the real culprit here.

“After observing gamma-ray bursts for two years, we have not detected the telltale neutrinos for cosmic-ray acceleration,” Halzen said.

Still, the results aren’t quite crystal clear yet.

“We’re not entirely clear yet as to what this neutrino flux we’re not seeing might mean,” Whitehorn told SPACE.com. “Our understanding of gamma-ray bursts is not complete — there’s a lot of theoretical uncertainty. I suspect what will happen now is that there’ll be a lot of efforts in the theory community of how to get neutrino fluxes compatible with the results.”

Instead of gamma ray bursts, researchers propose another source for these rays: black holes. They believe the supermassive black holes at the center of active galaxies may be responsible for these ultra-high-energy cosmic rays.

“Active galactic nuclei are big — great big accelerators that may be able to accelerate particles to very high energies,” said Klein, a long-time member of the IceCube Collaboration.