I really liked New York’s mayor Bloomberg campaign of limiting sugary drink consumption, but that didn’t really work out as good as we were hoping. Another, better idea that has a lot of potential however is conveying the food’s calories into walking.

So a regular burger would give you some 250 calories, which you can burn off by walking 2.6 miles (just over 4 km); at a regular, casual walking speed, that would take you about 45 minutes. Also, on a side note, that translates into 350.000 mouse clicks.

It is very possible that faced with a visual representation of the implications their food intake brings along, people will start making healthier choices. Anthony Viera at the University of North Carolina (U.N.C.) at Chapel Hill School of Medicine is trying to prove that:

“It requires a computation that many people might not find easy to make at the point of decision,” he says 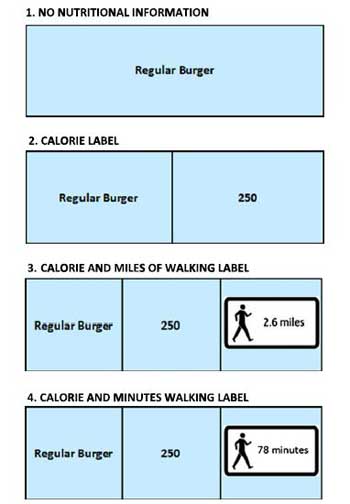 “The next stage is to see how this might work in a real-world setting,” says Sunaina Dowray, a medical student at the U.N.C. School of Medicine and lead author of the study.

A school cafeteria would probably be the best way to continue this; and the 200 out of 1000 (20 percent) calorie difference is very important. The notion of physical activity-based calorie label is stirring a lot of interest.

“This is a huge window of opportunity for the public health community to provide consumers useful information about calories,” says Sara Bleich of Johns Hopkins Bloomberg School of Public Health, who was not involved in the new study. “Information-based interventions that require less mental processing are typically more successful than information-based interventions requiring greater computation effort,” she adds.

What do you think, would you like to see such a labeling method implemented?