We had a good run!

Earlier this month, NASA’s Cassini probe embarked on a death spiral around Saturn’s orbit. Now, on Friday morning, September 15, scientists reported that they have received the last-ever message relayed by the probe, shortly before in plunged into the gas giant’s atmosphere.

This was the climax of a 20-year mission which was the $4-billion probe travel over two billion miles to Saturn. The collaborative mission between NASA, the European Space Agency and the Italian Space Agency aimed to study Saturn and its moons from close up and in the process learn more about the solar system and how it was formed.

Cassini-Huygens launched in 1997 and took seven years to reach its destination around Saturn and its 53 moons. The Huygens probe detached from the Cassini spacecraft in 2005 when it landed on Titan, Saturn’s largest moon. “This was humanity’s first successful attempt to land a probe on another world in the outer solar system,” the ESA says. 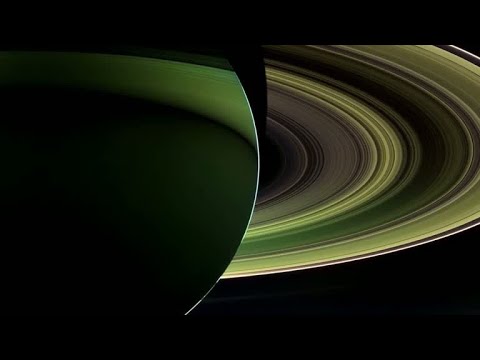 Over the course of its long mission, Cassini’s achievements were legion. Besides landing a freaking probe on Titan, a methane-filled world similar to the early days of Earth before life evolved, Cassini made the most planetary flybys any man-made craft ever has — over 100. Before arriving in Saturn’s orbit, Cassini circled Earth, Venus, and Jupiter. It was during these flybys that the most detailed true color photos of the gas giant ever recorded were beamed back to Earth.

Like a true explorer, Cassini has found hidden ‘lands and treatures’. No fewer than seven moons orbiting Saturn were identified by the spacecraft.  These include Methone, Pallene, Polydeuces, Daphnis, Anthe and Aegaeon.

The most important findings, however, were those considering Saturn’s icy moon Enceladus. During the spacecraft’s frequent flybys of the icy moon thought to host a hidden ocean of liquid water beneath hundreds of miles of ice, scientists found hints of conditions favorable for microbial life. NASA claims Enceladus has “water, organic carbon, nitrogen [in the form of ammonia], and an energy source,” which no other environment besides Earth can boast.

“As we continue to learn more about Enceladus, and compare data from different instruments, we are finding more and more evidence for a habitable ocean world,” Linda Spilker, Cassini Project Scientist, told NASA. “If life is eventually discovered in Enceladus’ ocean by a mission after Cassini, then our Enceladus discoveries will have been among the top discoveries for all planetary missions.”

After two decades of interplanetary travel, however, Cassini finally ran out of fuel. It still had enough left to power its boosters for another few years but NASA mission engineers didn’t want to take the risk of an uncontrolled landing on Titan or Enceladus. Instead, NASA seized the opportunity to plunge the spacecraft into Saturn’s atmosphere. For one last time, Cassini spread its wings and used its instruments to sample Saturn’s atmosphere. This information will teach us new things about a totally alien environment. A few minutes later, Cassini vaporized bellowing a ‘scream’ that took 83 minutes to reach Earth. It was then that the mission control announced ‘the end of the mission’ in a burst of applause, commemorating one of the most successful space missions in history.

We’re not done yet

Despite 13 years in Saturn’s orbit, there are still many unanswered questions. It’s still not clear how long a Saturnian day lasts and the planet’s magnetic field seems to behave capriciously. And though Cassini made extremely exciting discoveries that signal potentially habitable conditions on Enceladus, we still need more data before we can come to any sensible conclusions.

After all this mission, there’s a single conclusion we can draw: we have to come back. One thing’s for sure, Cassini didn’t perish in vain.