During a chance encounter with an unusually strong blast of solar wind at Saturn, NASA’s Cassini spacecraft detected particles being accelerated to ultra-high energies (like those at the LHC); this acceleration is similar to that which takes place around distant supernovas and provides a valuable in-situ study environment. 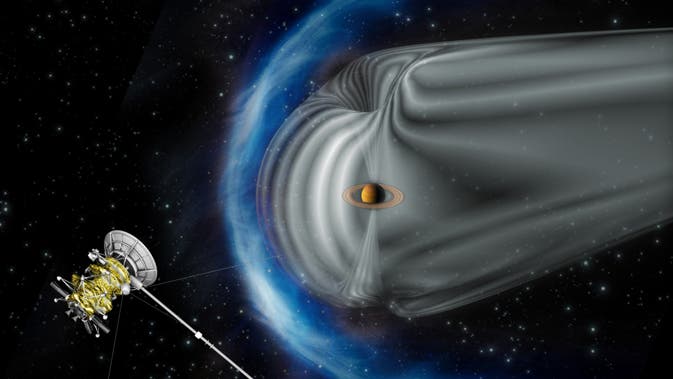 The Cassini spacecraft is an absolutely stunning evergreen source of information. Since we can’t exactly travel to distant supernovas and study this phenomena up close, the spacecraft provided a unique opportunity to observe this phenomenon up-close. The findings, published this week in the journal Nature Physics, confirm that certain kinds of shocks can become considerably more effective electron accelerators than previously thought.

Shockwaves are probably more common in space than you’d expect. The aftermath of a stellar explosion, for example, creates a huge shockwave accelerating the debris outward, just like the flow of particles from the sun (the solar wind) does when it reaches the magnetic field of a planet, forming a bow shock. Depending on the magnetic orientation and the strength of the shock, particles can be accelerated to close to the speed of light at these boundaries. These may actually be the dominant source of cosmic rays, high-energy particles that pervade our galaxy.

Researchers are most interested in what they call “quasi-parallel” shocks: where the magnetic field and the “forward”-facing direction of the shock are almost aligned – a good example of this is in supernova remnants. In this new study, Adam Masters of the Institute of Space and Astronautical Science, Sagamihara, Japan, describes the first detection of significant acceleration of electrons in a quasi-parallel shock at Saturn, coinciding with what may very well be the strongest shock ever encountered by researchers at the planet.

“Cassini has essentially given us the capability of studying the nature of a supernova shock in situ in our own solar system, bridging the gap to distant high-energy astrophysical phenomena that are usually only studied remotely,” said Masters.

Interestingly enough, this could provide useful information for particle physics, providing once again an example how phenomenas taking place at the largest of scales are tightly connected to those taking place in the subatomic universe.