The Cassini spacecraft recorded the aftermath of the largest, hottest gas vortex ever recorded in our solar system, making astrophysicists think there’s much more to Saturn’s atmosphere than meets the eye.

The Cassini-Huygens spacecraft (often just called Cassini) is a robotic ship sent out to monitor the Saturn system. It sent out surprising, valuable data not only from Saturn itself, but also from its many satellites (most notably Titan). This time, something truly remarkable caught its mechanical eye.

Not only was the storm of Gargantuan size (it could cover North America from top to bottom and go round the Earth many times), but what it was made of also baffled astronomers. The event was created when two warm spots on Saturn merged, and even though the result was invisible to the human eye, it was easily observed in infrared wavelength.

“This temperature spike is so extreme it’s almost unbelievable,” said Brigette Hesman, the study’s lead author who works at Goddard. “To get a temperature change of the same scale on Earth, you’d be going from the depths of winter in Fairbanks, Alaska, to the height of summer in the Mojave Desert,” Hesman said in a statement released by NASA. 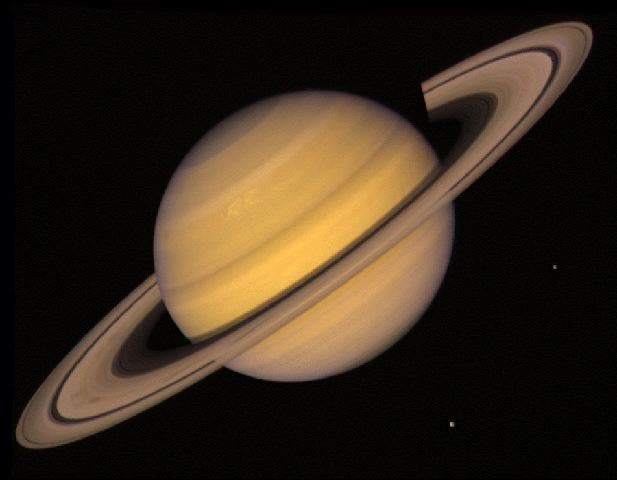 All this action was caused by the “Great Springtime Storm” that raged on Saturn in 2010 and 2011. The storm was so huge that it actually reached its own tail at the other end of the planet, and created huge temperatures. Researchers believed the hype was over, but continued to study the aftermath.

What they found was that the two remaining warm spots refused to cool down and continued to roam the planet, getting closer and closer to each other – finally merging in a catastrophic event. Temperatures in the storm skyrocketed to 150 degrees Fahrenheit, and a huge amount of ethylene suddenly appeared. Ethylene is an odorless hydrocarbon not usually found on Saturn; the amount of released ethylene is 100 times more than scientists believed possible – and no one knows where the hydrocarbon comes from.

The storm is expected to cool down by 2013, but astronomers are reluctant to make any more predictions, as they expect Saturn to hold even more surprises. Goddard scientists describe the unprecedented belch of energy in a paper which will be published in the Nov. 20 issue of the Astrophysical Journal.