The ISS: in space for 15 years

It's a remarkable landmark for the International Space Station (ISS) - it's been successfully orbiting the Earth for 15 years.

It’s a remarkable landmark for the International Space Station (ISS) – it’s been successfully orbiting the Earth for 15 years.

The ISS is a habitable artificial satellite, in low Earth orbit. Its first component launched into orbit in 1998, and the ISS is now the largest artificial body in orbit – so big that you can often be seen with the naked eye from Earth. The ISS is basically a micro-gravity research center in which crew members conduct experiments in biology, human biology, physics, astronomy, meteorology and even agriculture. It serves as a paving stone for other, future space flight projects.

It’s not the first space station. ISS is the ninth space station to be inhabited by crews, following the Soviet and later Russian Salyut, Almaz, and Mir stations as well as Skylab from the US. However, it is by far, the largest and more productive. Many of the scientific advancements we today take as granted came from the ISS, and maintaining an outpost in micro-gravity will prove invaluable in the future. Dr. John Holdren, director of the White House Office of Science and Technology Policy said:

“The International Space Station is a unique laboratory that has enabled groundbreaking research in the life and physical sciences and has provided a test bed for the technologies that will allow NASA to once again send astronauts beyond Earth’s orbit. The international partnership that built and maintains the Station is a shining example, moreover, of what humanity can accomplish when we work together in peace. I congratulate all of the men and women at NASA and around the world who have worked so hard to keep the International Space Station operational these past 15 years. Everyone involved can be proud of this incredible achievement.”

“Over the weekend, I called NASA astronaut Scott Kelly, who is currently halfway through his one-year mission aboard the International Space Station, to congratulate him on setting the American records for both cumulative and continuous days in space. I also took the opportunity to congratulate Commander Kelly — and the rest of the space station crew — for being part of a remarkable moment 5,478 days in the making: the 15th anniversary of continuous human presence aboard the space station. I believe the station should be considered the blueprint for peaceful global cooperation. For more than a decade and a half, it has taught us about what’s possible when tens of thousands of people across 15 countries collaborate to advance shared goals.”

The ISS programme is a joint project among five participating space agencies: NASA, Roscosmos, JAXA, ESA, and CSA. It’s a monumental testament to what humans can achieve if they work together. Hopefully, its success and legacy will carry on and lead to even greater achievements. Here’s an Infographic NASA published about 15 years on the ISS: 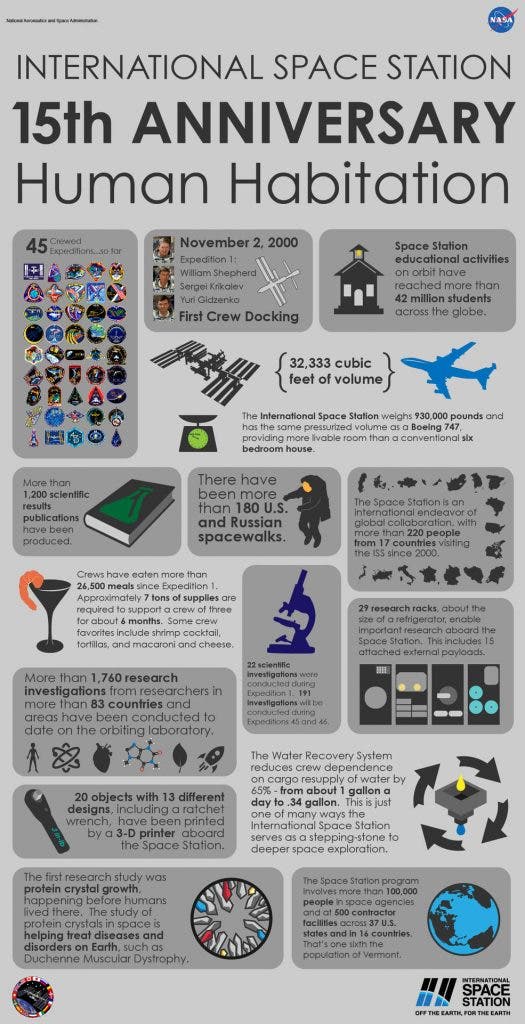