A well-known asteroid is spectacularly disintegrating before astronomers' eyes.

by Jordan Strickler
in News, Science, Space
A A

Almost 214 million miles (344 million km) from the sun, an asteroid is doing its best comet-like impression. Astronomers at the University of Hawaii have discovered an asteroid that is spinning itself into pieces, generating two debris tails of dust in the process.

First discovered in 1988, the first signs that the asteroid was self-destructing came on January 5. Using NASA’s Hubble Space Telescope, along with a variety of ground-based instruments in Hawaii, Spain, and India, astronomers found two debris tails trailing 6478 Gault in the main asteroid belt between Mars and Jupiter.

“This self-destruction event is rare,” Olivier Hainaut, of the European Southern Observatory in Garching, Germany, and co-author of the report said. “Active and unstable asteroids such as Gault are just now being detected because of new survey telescopes that scan the entire sky, which means asteroids that are misbehaving such as Gault cannot escape detection anymore.”

The observations are the first pieces of evidence of Gault’s misbehavior and suggest that asteroids are dynamic and can ultimately disintegrate due to the long-term subtle effect of sunlight, which can slowly spin them up until they begin to shed material. In Gault’s case, the asteroid is doing a speedy rotation every two hours, so fast that Gault is flinging material off its surface and into the void.

“Gault is the best ‘smoking-gun’ example of a fast rotator right at the two-hour limit,” said the University of Hawaii’s Jan Kleyna. “It could have been on the brink of instability for 10 million years. Even a tiny disturbance, like a small impact from a pebble, might have triggered the recent outbursts.” 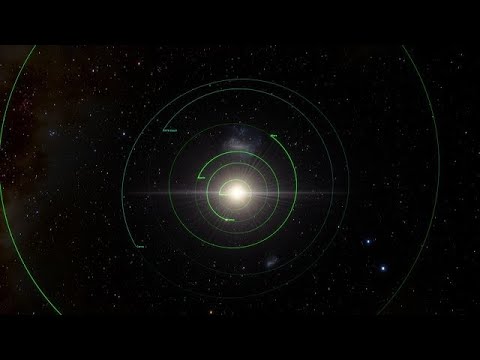 Watching an asteroid come unglued like Gault gives astronomers the opportunity to study the makeup of asteroids without sending a spacecraft for samples. Analyzing an asteroid’s ingredients as they are spread out into space can offer astronomers a glimpse into planet formation in the early solar system.

“We didn’t have to visit Gault,” explained Hainaut. “We just had to look at the image of the streamers, and we can see all of the dust grains sorted neatly by size. All the large grains (about the size of sand particles) are close to the object and the smallest grains (about the size of flour) are the farthest away, because they are being pushed fastest by pressure from sunlight.”