by Mihai Andrei
in Alien life, Astronomy, Interviews
Reading Time: 4 mins read
A A
Share on FacebookShare on TwitterSubmit to Reddit

A while ago, we were telling you about the discovery of a huge exoplanet – a gas giant, found just 155 light years away from Earth. The head researcher behind that study was Marie-Eve Naud. Her main research field is the detection and characterization of exoplanets, with a focus on astrobiology. She was kind enough to talk to us and shed some light on what she studies, and what’s it like to be in such an exciting field! You can read the interview below:

ZME Science (Andrei): I read that you directly imaged the planet in infrared. How did you find it, is it like looking for a needle in a hay stack, or are there certain clues for finding planets? Do you have certain clusters of stars which are more likely to host planets? 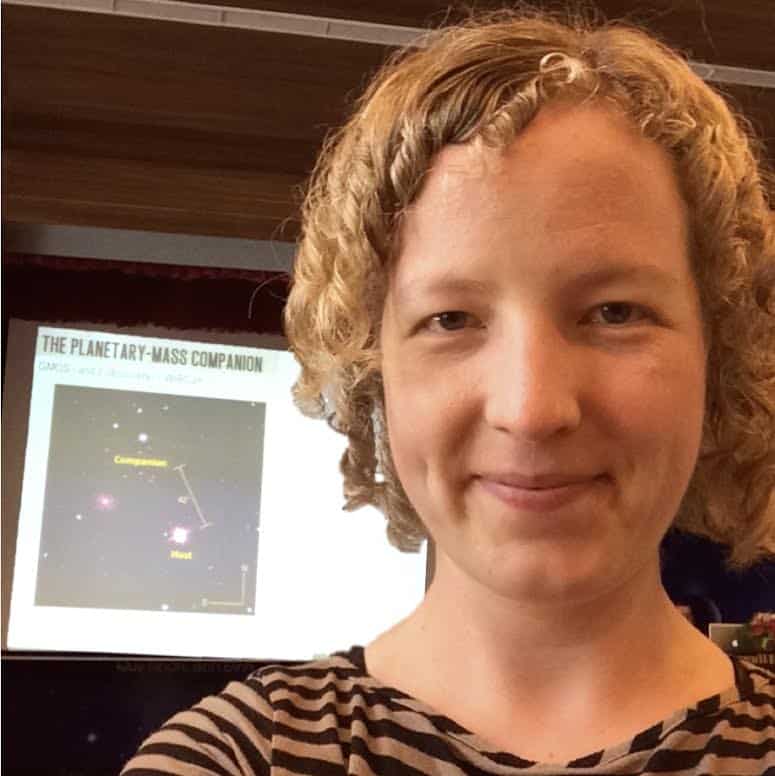 Marie-Eve Naud: With the technique that we use, which is called “Direct Imaging”, it’s much easier to find planets around young stars, i.e. stars that are only a few dozen to ~100-200Myr (in comparison, our Sun is ~4.6Gyr). This is the case because young stars harbour young planets, which are still contracting, and thus hotter and bigger, so more luminous. We were thus searching around a sample of stars which we knew were quite young because they were recently identified as members of Young Moving Groups, i.e. groups of young stars that were formed “together”, at a similar point in space and time. Just to be clear, though, it’s not necessarily that these young stars are more likely to harbour planets, it’s just that we are more likely to be able to find them there with the technique we used.

A: Could this technique have worked if the planet was smaller or closer to its star?

M: Very good good question. To a certain extent, no. It is really hard to find planets the way we do, i.e. by seeing “directly” the light of the planet. If the planet is too close or too faint (which is the case if it is smaller – or older, like I said earlier), it’s hard harder to disentangle its light from that, much more intense, of the parent star. However, some instruments like the Gemini Planet Imager (GPI) on the Gemini South telescope in Chile were specifically built to detect smaller and closer planets (still giants and still quite far from their stars, but smaller and closer than GU Psc b).

A: I read that your co-author René Doyon said that “the great distance that separates it from its star makes possible a thorough study with a variety of instruments” – what instruments are we talking about? What kind of information can we derive from studying it with different instruments?

M: For example, we were able to get a spectrum of the planet using a spectrograph called GNIRS on Gemini North telescope, located in Hawaii, which gave us information about the temperature, and from which we were able to estimate that the mass is between 9 and 13 times that of Jupiter.

A: Wow, that’s amazing! Speaking of temperature, the surface of the planet is 800 °C (1472 °F) – almost twice as hot as Mercury, even though it’s incredibly far from its star. Is this because the planet is young and hasn’t had a chance to cool down, or is it something else?

M: Exactly as you say ;) The planet does not receive a significant amount of heating from its star, which is too far and too faint (only about 1/3 of the mass of the Sun).

A: Are planets like this common in the galaxy/universe?

M: We still have to figure this out, but we don’t think so. Out of the 90 stars we surveyed, GU Psc was the only one around which we detected a planetary-mass companion that far.

A: What will your future research focus on?

M:I’ll first try to assess more quantitatively the occurrence of these very wide, giant companions by doing a statistical study of our results. Also, I will continue to study GU Psc b to learn more about this fascinating object!

A: Keep up the good work!Again, thank you for taking the time to write to me.