U.S. small town rejects solar project out of fear it would ‘suck up all the energy from the sun’

Citizens were against installing a solar farm because it would suck all the energy from the sun -- so plants will die.

by Tibi Puiu
in News, Renewable Energy, Science
A A 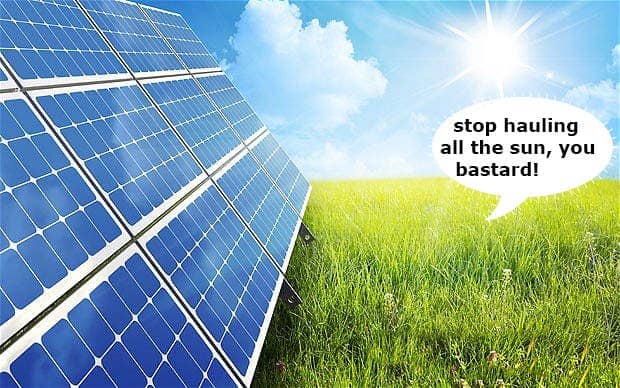 In news worthy of satire, the town council of  Woodland, North Carolina rejected a proposal that would allow the Strata Solar Company to build a solar farm off Highway 258. Furthermore a moratorium on solar farms has been instituted that will see three previously accepted solar farm projects suspended until further notice. The decision reflected the fears and angst expressed by Woodland residents that such solar installation would harm the community, its economy and biodiversity. Bobby Mann, present at the meeting where the decision was made, said he was afraid  Woodland would become a ghost town because of the solar farms. According to the Roanoke-Chowan News Herald, Mann said the solar farm “would suck up all the energy from the sun and businesses would not come to Woodland.”

In the same meeting, Jane Mann, a retired science teacher, said that the local, beautiful plants depend on photosynthesis to survive. As such, the solar panels would keep the plants from growing. She said she has observed areas near solar panels where the plants are brown and dead because they did not get enough sunlight. Later, she said she found a link between a high number of cancer deaths in the area and solar panels. She added that ‘no one could tell her that solar panels didn’t cause cancer.’

“I want to know what’s going to happen,” she said. “I want information. Enough is enough. I don’t see the profit for the town.

“People come with hidden agendas,” she said. “Until we can find if anything is going to damage this community, we shouldn’t sign any paper.”

Other residents were much more moderate, saying the town is surrounded by solar farms and is no longer worth its value because of those facilities. The only funding the town would get is about $7,000 per year to train the fire department in case something goes wrong. This is actually a legitimate concern, and the solar companies involved in Woodland should have provided better incentives to the local community, like cheaper electricity.

Other than that, most objections are hilarious. Solar panels don’t suck up the sun, nor cause cancer. What causes cancer is coal-fired plants. The only sunlight that gets ‘sucked away’ is the one that hits the panels directly. Yes, plants wither and may die if these grow right beneath the solar panels. As for jobs, I apologize if I might hurt anyone’s feelings but it seems the reason why there isn’t work anymore in this town is because businesses may be reluctant to join such a close-minded community.