Tesla seeks to make EVs mainstream: announces new car at half the price of Model S

Despite the naysayers and constant thorns thrown about by oil lobbyists in the  US, Elon Musk‘s Tesla is doing fine, thanks to fantastic leadership, innovative marketing (free charging, battery swapping, Tesla’s own supercharge west coast highway, etc.) and sound engineering. Still, Tesla is an inaccessible brand for most people because of its high-end pricing, but not for long. The company recently announced it will soon release its third car, dubbed Model 3, which will address a far wider audience being priced at only $35,000 or roughly half as much as the successful Model S.

The Model S has been a success for Tesla. The EV is just as a fast and reliable as any luxury sports roadster that uses internal combustion, accelerating  0-60 mph in only 4.2 seconds, and with a range of 300 miles it does well to compensate for most autonomy issues people usually have with electric vehicles. Priced at $70,000 for the cheapest version and going upwards $90,000 for the top-end option, it’s clear the Model S is geared towards wealthy early adopters. Spring doesn’t come with only flower, though, and while Tesla is profitable, with only 30,000 units shipped so far, it’s hard to believe Tesla will revolutionize the automobile industry at this rate.

This is where the Model 3 comes in. While we’ve yet to hear anything really specific about it, apart from the pricing and a 2016 release date, Tesla’s lead designer Franz von Holzhausen has said previously that the Model 3 will have a more distinctive design than the Model S. The car itself will be 20% smaller, fairly lighter and a lot cheaper. So, where’s does the price cut come from? At half the Model S price, expect some lower performance. Tesla officials have been quoted saying the Model 3 will have a range of 200 miles (compared to 300 for the Model S) and will most likely feature lower power. Some of the lower costs, however, have been driven by optimizations  like better batteries which are always improving year round. 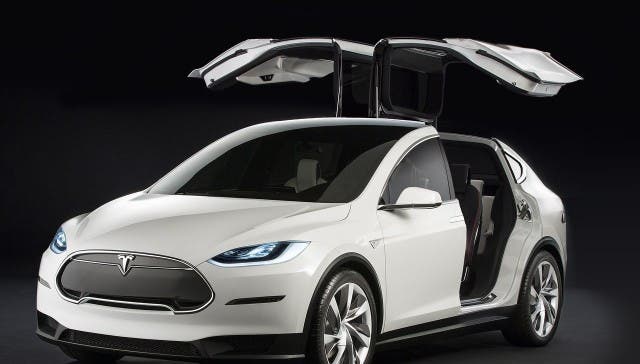 In the meantime, the second car slated for release by Tesla will be the Model X  – a crossover utility vehicle based on the Model S, but with a higher roof and falcon-wing doors – with a target delivery date of Q2 2015. With the Model X and Model 3, Tesla plans to finally make EV mainstream and push the company out of its early adopters cone. Funny enough, the Model 3 was initially named Model E, but a potential lawsuit with Ford forced the company to change it.

“We had the model S for sedan and X for crossover SUV, then a friend asked what we were going to call the third car. So I said we had the Model S and X, we might as well have the E. We were going to call it model E for a while and then Ford sued us saying it wanted to use the Model E — I thought this is crazy, Ford’s trying to kill sex! So we’ll have to think of another name. The new model is going to be called Model 3, we’ll have three bars to represent it and it’ll be S III X!” said Musk.