A nearby star may have just consumed a planet, NASA reports.

Some 450 light years away from Earth, the young star RW Aur A just finished chowing down on a planet — probably.

RW Aur A has captured astronomers’ attention ever since 1937. Nestled in the Taurus-Auriga Dark Clouds, which host stellar nurseries containing thousands of infant stars, its light tends to dim “every few decades for about a month,” according to NASA. Needless to say, this has made researchers very curious ever since we realized it. But then, back in 2011, something happened to throw all this interest into high gear: the star became dimmer far more often, and for longer periods of time.

To get to the bottom of things, a team of researchers pointed the Chandra X-ray Observatory towards RW Aur A over a five-year period. Chandra is a space telescope first launched in 1999, but which still boasts extremely sensitive X-ray sensors that can make sense of the radiation emitted even by young stars such as RW Aur A.

While young stars can be just as perky as any other, they’re typically shrouded in thick disks of gas, dust, and larger debris — which filter their radiation output and alter their intensity. While this makes less-sensitive instruments practically blind to the shrouded stars, instruments like Chandra can use the ‘filtered’ radiation to estimate what the disks are made of.

And that’s exactly what the team did in this case. According to the paper reporting the findings, Chandra detected surprisingly high levels of iron around RW Aur A. Since previous measurements didn’t record the same concentrations of iron (rather they picked up on much lower levels), the only possible explanation is that an event ejected a huge quantity of the element around the star.

They believe that all this iron came from a planet — or a few planetesimals — colliding with one another around the star. If any one of these bodies was rich in iron, it would explain the high levels seen in the disks around RW Aur A. Chandra recordings in 2017 revealed strong emission from iron atoms, indicating that the disk contained at least 10 times more iron than recordings captured in 2013 during a bright period.

The team speculates that this iron excess comes from a collision of two infant planetary bodies — including at least one object large enough to be a planet — in the space surrounding RW Aur A. Such an event would vaporize a large amount of material from the stars, including some iron. Furthermore, as the larger chunks of debris fall towards the star under its gravitational tug, they would release even more iron as the intense heat breaks them apart and solar winds batter them. Taken together, it would explain the high levels of iron observed in the star’s corona. 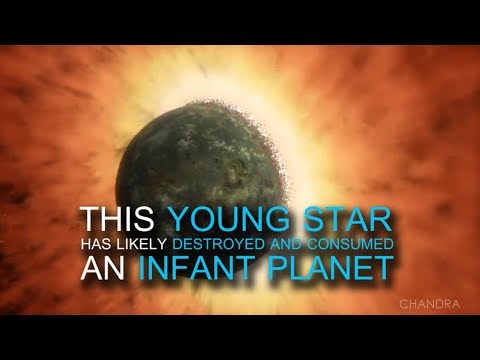 Better yet, it would also explain the dimming we see. As this debris falls into the star, it could be physically obscuring its light.

“If our interpretation of the data is correct, this would be the first time that we directly observe a young star devouring a planet or planets,” says Hans Guenther, who led the study out of MIT’s Kavli Institute for Astrophysics and Space Research.

With this in mind, an alternative explanation is also possible — if far less epic. RW Aur A is part of a binary star system, the sister of (you’ll never guess it) RW Aur B. If small grains of iron-rich particles can become trapped in certain parts of a star’s disk, and if that disk is perturbed by something massive (say, another star) the resulting interplay of tidal forces could stir the iron-rich particles — and make the disk seem richer in iron as all this dust falls into RW Aur A and obscures its light.

The team plans to continue their observations of the star over the next couple of years to see if iron levels stay constant. If they do, it would point to a massive source of iron (i.e. in favor of the collision scenario); if not, the tidal interaction between the two stars would seem like the more likely choice.

“Much effort currently goes into learning about exoplanets and how they form, so it is obviously very important to see how young planets could be destroyed in interactions with their host stars and other young planets, and what factors determine if they survive,” Guenther says.

Needless to say, I’m rooting for the collision scenario.

The paper “Optical Dimming of RW Aur Associated with an Iron-rich Corona and Exceptionally High Absorbing Column Density” has been published in the journal The Astronomical Journal.