It's hard to believe anything can be alive thousands of feet below the Indian Ocean where thermal vents effectively boil the water. Yet even in the most inhospitable conditions, life has a way of creeping in. Such is the case of chrysomallon squamiferum, a snail-like creature which may very well sport the best armor in the animal kingdom.

It’s hard to believe anything can be alive thousands of feet below the Indian Ocean where thermal vents effectively boil the water. Yet even in the most inhospitable conditions, life has a way of creeping in. Such is the case of chrysomallon squamiferum, a snail-like creature which may very well sport the best armor in the animal kingdom.

Better known as the scaly-foot gastropod, the C. squamiferum is a species of deep-sea, hydrothermal-vent snail. It only lives in the deep-sea hydrothermal vents of Indian Ocean, from around 2,400 metres (1.5 mi) to 2,800 metres (1.7 mi) deep. The first scaly-foot gastropods were found at the Kairei hydrothermal vent field on the Central Indian Ridge in 2001, living on the bases of black smokers. These are places on the bottom of the sea where tectonic plates move apart from each other, allowing magma to heat and cause water to boil, that have risen to form a chimney-like structure.

Subsequent specimens were found just north of the Rodrigues Triple Point, in Solitaire field off the coast of Mauritius in the Central Indian Ridge and Longqi (aka. Dragon) field, southwest of the Indian Ridge.

The scaly-foot gastropod’s shell and foot-scales boast three distinct layers that protect the snail from predators and the extreme environment it lives in. Its shell’s structure basically mirrors those of other mollusks and snails, with an extra (and extra-awesome, we’ll get to it in a bit) layer of plate “bolted” on over it. So, where there would be two distinct structural levels in a shell, the scaly-fool gastropod has three.

The inner layer of their shell is made of aragonite, a form of calcium carbonate that is commonly found both in the shells of molluscs and in various corals. This inner layer helps dissipate heat, saving the snail from a slow, volcanic-induced simmer.

The middle layer is equivalent to the organic outer layer also found in other gastropods, and is also the thickest of the three – about 150 μm.  This layer appears to act as padding absorb the mechanical strain and energy generated by a squeezing attack (as by the claws of a crab), making the shell much tougher, and harder to break. 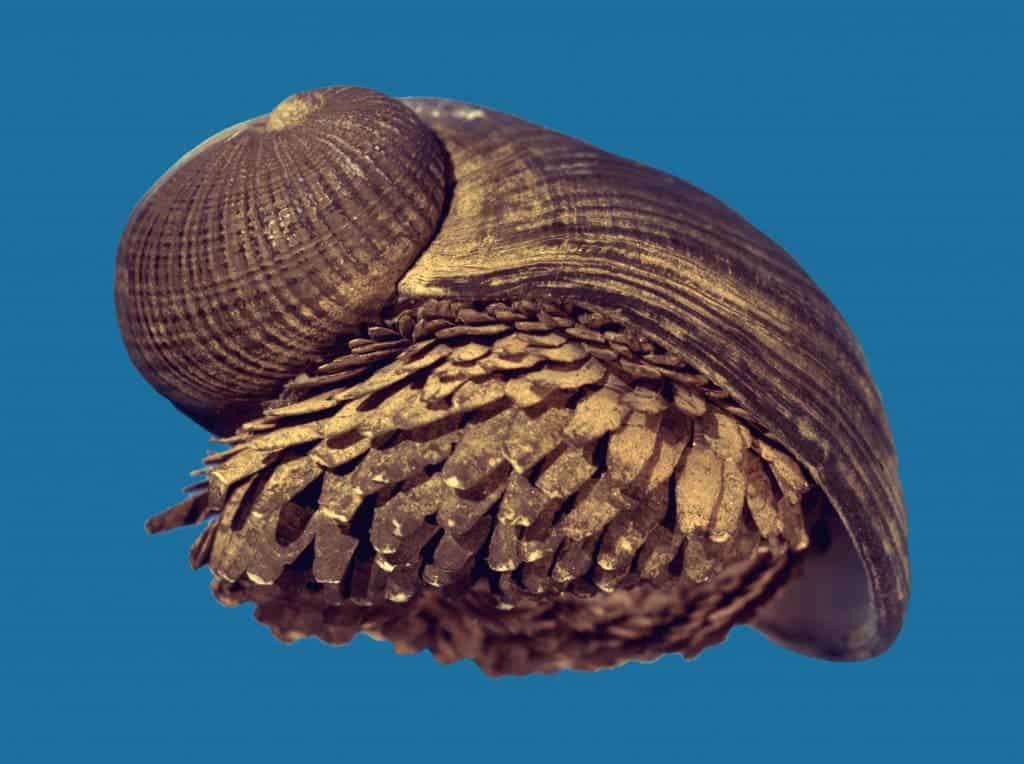 But most impressive of all is the outer layer. It is about 30 μm thick, and made of iron sulphides, in particular pyrite and greigite. This makes this gastropod the only metazoan (and indeed the only animal) known so far that employs such material in its skeleton. The greigite nanoparticles that cover the outer shell mainly serve as a shock absorbent. When the snail’s shell is subjected to a high pressure, the shell cracks around the particles, absorbing energy and blunting and deforming the predators’ claws. The shell thus becomes littered with thousands of microcracks that not only absorb the shock, but also prevent large cracks from forming on the shell which would have been fatal for the snail.

The snail’s shell is so impressive that the United States military is currently funding research on it in hopes of developing insights into new military armor designs.

“It is the first step in understanding how we could create an engineered synthetic mimic of a protective structure,” said Christine Ortiz of MIT who along with colleagues studied the snail’s three-layered shell.

The waters where these tiny metal bunkers live are high in sulfides and metals, which the snails have learned to incorporate into their shells.

The Solitaire population has white sclerites instead of black due to lack of iron in them, most likely due to differences in the vent fluid composition, making them the only scaly foot gastropods that do not wear iron armor.

The purpose of sclerites has been speculated to be protection or detoxification, but their true function is yet unconfirmed.

The sclerites of Kairei population is strongly magnetic due to the greigite (sulfur equivalent of magnetite) content in the shell’s composition. This also makes them stick to magnets.

And last of the three, the Longqi population, lives on and around the Longqi Hydrothermal Field. They have a browner shade to their shells, owing to the ratios of pyrite and gregite their plates use – pyrite is golden in color, and mixed with the dark gregite it makes them lighter than the Kairei but darker than the Solitaire.

To top this all off let’s have a look at the wonderful place the scaly-foot gastropod calls home.

“The floor is lava” is probably all the rage with baby scaly-foots.