When Science and Poetry go out for lunch: the Best Science Limericks

by Mihai Andrei
in Art, Feature Post, Science
A A

Limericks are a very specific type of poetry that emerged in England in the early years of the 18th century. It was popularized by Edward Lear in the 19th century although curiously, he didn’t coin the term “limerick”, and we don’t know where it came from.

Your units are wrong! cried the teacher.
Your church weighs six joules — what a feature!
And the people inside
Are four hours wide,
And eight gauss away from the preacher!

As you can see, the classic rhythm of the limerick is still prevalent, as well as the rhyming structure (AABBA). They often have vulgar or sexual references that are serve as the punch like or to accentuate comedic effect:

A doctor whose penis turned green
Asked a medico what did it mean
He said “It’s a curse
From bonking that nurse
Too close to the X-ray machine!”

However, in recent times, that trend seems to have waned, leaving limericks relying more on clever constructions and sarcasm. From the Wordsworth Book of Limericks:

Said an ape as he swung by his tail,
To his offspring both female and male,
“From your offspring, my dears,
In a couple of years,
May evolve a professor at Yale.”
A flea and a fly in a flue
Were imprisoned, so what could they do?
Said the fly,” let us flee!”
“let us fly!” said the flea.
So they flew through a flaw in the flue.

Scientists and especially physicists seem to have taken quite a liking to limericks, and ceremoniously brought science and art together in this form. The following limerick refers to the famous “hunter and the monkey problem”.

In it, a hunter aims an arrow at a monkey hanging from a branch in a tree. The monkey, thinking he’s being clever, tries to avoid the arrow by letting go of the branch right when he sees the arrow released. The unfortunate consequence of this action is that he will get hit, because gravity acts on both him and the arrow in the same way (via Harvard):

If a monkey lets go of a tree,
The arrow will hit him, you see,
Because both heights are pared
By a half gt2
From what they would be with no g.

Referring to Newton’s law of gravitation that says objects of all scales behave in the same manner, dependent on the 1/r form of the gravitational potential, a clever author wrote: 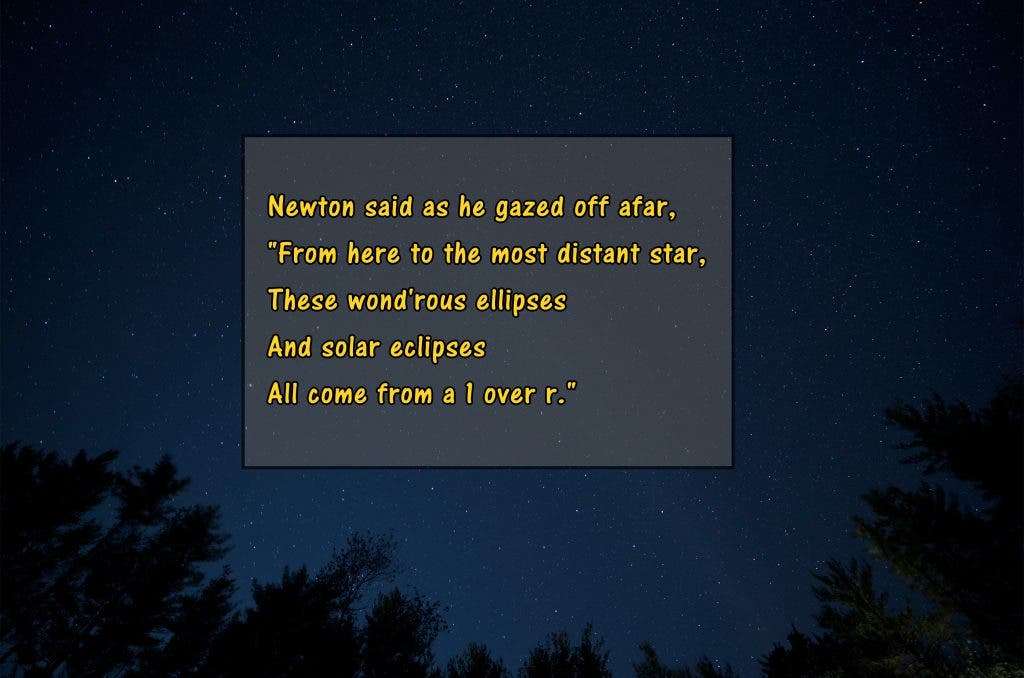 Can you figure out what the two numbers are? If you can, and you found that easy you might enjoy DeVicci’s “quadruple limerick” in four parts (answers here):

Consider a cube for a minute
And imagine the largest square in it.
If you’re a math whiz,
Tell me how big it is;
It’s tricky to even begin it!

Now let us move up one dimension:
Find the cube of the largest extension
That fits (neatly packed)
Into one tesseract,
And, boy, will you have stress and tension!

Martin Gardner proposed this last question,
And I solved it, at no one’s suggestion.
It took 15 years
Of blood, sweat and tears,
And gave me severe indigestion.

My proof fills up 100 pages;
‘Til I solved it, it stumpled all the sages.
It was recently checked
And pronounced quite correct,
But it hasn’t augmented my wages.

Those are just a few of the science limericks I found and liked. Have more? Do share them with us!