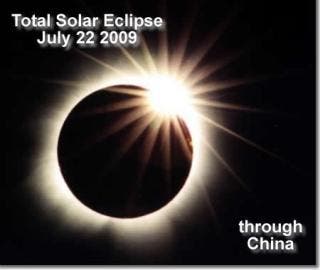 Scientists from the observatory near Hangzhou joined tourists and locals in observing the longest eclipse of the century, and possibly the longest one since the dawn of civilization. People all over China and India (and not only) watched in awe for 5 minutes and 36 seconds as the moon’s shadow covered their countries.

“We saw it! The clouds kept getting thinner, and we even had a pretty good-sized hole in the clouds for the five minutes of totality,” reported Expedition Leader Jay Pasachoff, Field Memorial Professor of Astronomy at Williams and chair of the International Astronomical Union’s Working Group on Solar Eclipses.”

“Everyone saw all the coronal phenomena. The diamond rings were spectacular. Just before totality, the clouds were just the right thickness that allowed us to see partial phases without filters.”

This is even more impressing coming from a man who just witnessed his 49th solar eclipse. He and his colleagues are capturing data from numerous solar eclipses to find out why the sun’s corona shines brighter than the sun itself. The next solar eclipse will be on July 11, 2010, but it will hit only the Cook Islands, Easter Island, and a small section of southern Chile and Argentina.