A group of international researchers unveiled the world's thinnest light bulb. Remarkably it uses a carbon-based filament, just like Thomas Edison used in 1879 for the first truly commercially-viable incandescent bulb. Unlike Edison, however, the group used carbon in its pure form and ultimate size limit - one atom-thick graphene sheets. Remarkably, the tiny bulb emits light visible to the naked eye. Of course, these sort of designs aren't about setting milestones, though it's always interesting to see how low or high down the scale you can go with engineering. Mostly, graphene-based light sources might prove useful for optical communications where bits are transmitted via packets of photons, instead of electrons.

by Tibi Puiu
in News, Physics, Technology
Reading Time: 4 mins read
A A
Share on FacebookShare on TwitterSubmit to Reddit 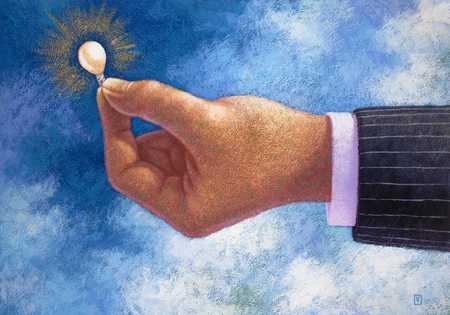 A group of international researchers unveiled the world’s thinnest light bulb. Remarkably it uses a carbon-based filament, just like Thomas Edison used in 1879 for the first truly commercially-viable incandescent bulb. Unlike Edison, however, the group used carbon in its pure form and ultimate size limit – one-atom-thick graphene sheets. Remarkably, the tiny bulb emits light visible to the naked eye. Of course, these sort of designs aren’t about setting milestones, though it’s always interesting to see how low or high down the scale you can go with engineering. Mostly, graphene-based light sources might prove useful for optical communications where bits are transmitted via packets of photons, instead of electrons.

“We’ve created what is essentially the world’s thinnest light bulb,” says Hone, Wang Fon-Jen Professor of Mechanical Engineering at Columbia Engineering and co-author of the study. “This new type of ‘broadband’ light emitter can be integrated into chips and will pave the way towards the realization of atomically thin, flexible, and transparent displays, and graphene-based on-chip optical communications.”

The goal is to build photonic on-chip circuits that can basically do the same things as conventional semiconductor integrated circuits can: compute, read data, etc. All sorts of approaches have been tried, mostly using LEDs, but everyone seems to have been stomped when dealing with incandescent light sources. That’s because their basis of operation relies on heating the filament to very high temperatures.

In a conventional incandescent light bulb, when electrical current passes through a wire, it causes the wire to heat because electrons constantly bump into the atoms that make the conductor (say tungsten). The energy of each impact vibration heats the atoms, and some will jump to a higher energy level only to bounce back. When this happens the electrons release the extra energy in the form of photons. Mostly, this energy is comprised mostly of infrared light photons which are invisible to the human eye. Only about 10% of the light falls into the visible spectrum, while the rest is basically lost heat. That’s why LEDs are at least ten times more energy efficient than bulbs since they convert most of the incoming energy into visible light, with only a fraction lost as heat.

So, when you place a tiny bulb on an equally tiny sublayer supporting material, the high temperatures of the filament, which can be up to half that found on the surface of the sun, makes it difficult to design optical chimps. But graphene seems to work fine, again thanks to its unique physical properties.

Small strips of graphene (filament) were attached to metal electrodes, then suspended above the substrate. The researchers from the US and South Korea found that the graphene strips heated to around 2500 Kelvin or enough to glow and emit light. In fact, they could see it with the naked eye. But why didn’t the thin electrodes or substrate melt? That’s because graphene is awesome: its heat transfer is inversely proportional to its temperature. The hotter graphene gets, the less heat it exchanges with its environment over a given time frame. Thus, those really high temperatures stay confined in hot spots in the center of the graphene filament, as reported in Nature Natotechnology.

“At the highest temperatures, the electron temperature is much higher than that of acoustic vibrational modes of the graphene lattice, so that less energy is needed to attain temperatures needed for visible light emission,” Myung-Ho Bae, a senior researcher at KRISS and co-lead author, observes. “These unique thermal properties allow us to heat the suspended graphene up to half of temperature of the sun, and improve efficiency 1000 times, as compared to graphene on a solid substrate.”

Based on this first demo, the researchers then built a full array of tiny graphene bulbs using vapor deposition. Next, the team needs to fully characterize the bulbs. For instance, one major concern is lifespan. Another deals with how fast it can be switched on or off to send bits for communication (1s and 0s).

“We are just starting to dream about other uses for these structures—for example, as micro-hotplates that can be heated to thousands of degrees in a fraction of a second to study high-temperature chemical reactions or catalysis,” Hone added.