To be quite honest, there are moments when I feel that I don’t understand quantum mechanics at all – the phenomena involved in the field are so complex and counter intuitive one can only stop and wonder if God does in fact play dice with the Universe… but at any rate, the advancements produced by quantum mechanics are, as Einstein himself confessed, imposing. Interestingly enough, it’s quantum mechanics that helped back up one of Einstein’s most important theories. 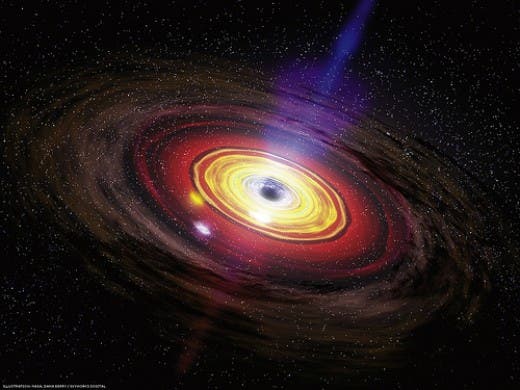 Something which puzzled researchers in 2012 was the so-called firewall paradox; basically, this idea stated that anyone falling into a (relatively big) black hole would be burned up as they crossed the event horizon. If this were true, then it would contradict Einstein’s theory of relativity. But Professor Sam Braunstein and Dr Stefano Pirandola have helped extinguished the fire.

In a paper published in Physical Review Letters, they use quantum information theory, a modern branch of quantum mechanics that treats photons and atoms as information carriers:

“Quantum mechanics shows that [quantum] entanglement can exist across the event horizon, between particles inside and outside the black hole. But should this entanglement ever vanish, a barrier of energetic particles would be created: an energetic curtain (or firewall) would descend around the horizon of the black hole”.

Wow! Again, in all honesty, this is something very hard to wrap your head around, because the concepts involved that lead to this conclusion are so mathematically complicated that only a handful of people worldwide are able to work with them, and even understanding the principles requires a stretch.

“We are the first to show the necessity of entanglement across all black hole event horizons and to consider what happens as black holes age. The greater the entanglement, the later the curtain descends. But if the entanglement is maximal, the firewall never occurs. Indeed, entanglement has long been believed to exist for some types of black holes, taking on exactly this maximum value. Our work confirms and generalizes this claim.”

It’s important to note that their work has its basis on Stephen Hawking’s initial theory that black holes carry information, which further postulates that they harbor information about all the things they swallow:

“When quantum mechanics, and in particular entanglement, are included in the story, Hawking’s prediction holds for the longest time possible. Our results not only back up Einstein’s theory of gravity, but also point to quantum information theory as a powerful tool for disentangling the deep mysteries of the Universe.”