by Mihai Andrei
in Biology, Chemistry, Physics
A A 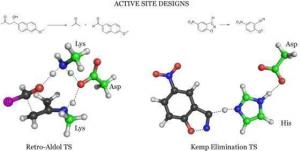 In what is a great leap for science, scientists from UCLA and the University of Washington have succeeded in creating “designer enzymes,” a major milestone in computational chemistry and protein engineering. The two groups were led by UCLA’s chemistry professor Kendall Houk and Washington’s biochemist David Baker.

Designer enzymes will have applications for defense against biological warfare, by deactivating pathogenic biological agents, and for creating more effective medications, according to Houk. The results seem very promising and scientists are pleased.

“The design of new enzymes for reactions not normally catalyzed in nature is finally feasible,” Houk said. “The goal of our research is to use computational methods to design the arrangement of groups inside a protein to cause any desired reaction to occur.”

“Enzymes are such potent catalysts; we want to harness that catalytic ability,” said research co-author Jason DeChancie, an advanced UCLA chemistry graduate student working with Houk’s group. “We want to design enzymes for reactions that naturally occurring enzymes don’t do. There are limits on the reactions that natural enzymes carry out, compared with what we can dream up that enzymes can potentially do.”

Combining chemistry, mathematics and physics is no kid’s play but it’s the result of years and years of hard work and colaborations from many scientists from many fields. In the paper they’ve published in Nature they reported that they have successfully created designer enzymes for a chemical reaction known as the Kemp elimination, a non-natural chemical transformation in which hydrogen is pulled off a carbon atom.