Get the latest LHC details via a phone app

A whole lot of people have been closely following the developments at the Large Hadron Collider, but now, all that may become a whole lot easier, thanks to an Android based application which allows users to see the latest colliding protons, among others, at the world’s largest particle accelerator, located at the French/Swiss border. 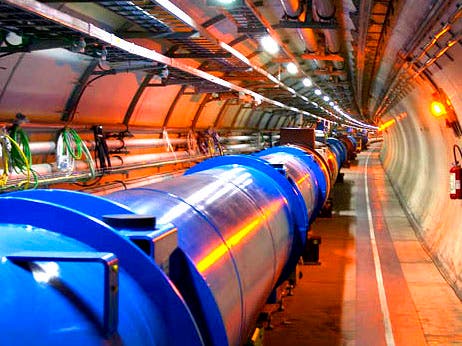 LHSee, the new Android application (get it here), allows aspiring physicists and science afficionados to see particle collisions in real time and in 3D, hunt for (so far) theoretical particles, and even learn how the LHC works!

The app was developed by Alan Barr, from the Oxford University, but it was supported and endorsed by CERN itself, under which the LHC functions. According to them, it has already been downloaded 10.000 times! Hey, maybe there’s hope for the world after all!

According to developers, the app is aimed at ‘experts and non-experts alike’, as it offers the chance to explore different parts of the detector and learn about the reactions the scientists there are looking for.

“For ages, I’d been thinking that with the amazing capabilities on modern smartphones we really ought to be able to make a really great app – something that would allow everybody to access the LHC data,” said Barr, on the official Oxford science blog.

It is certainly an initiative worth applauding, and hopefully, other scientific programs will take this example, and soon enough, we could keep in touch with developments from the entire scientific world, directly on our phones.

“I’d sounded out a few commercial companies who said they could do the job but I found that it would be expensive, and of course I’d have to teach their designers a lot of physics. So the idea was shelved,” continued Barr, “Then, a few months later, I had one of those eureka moments that make Oxford so wonderful.”

So, even if you’re a physics newbie or a hardcore particle physics fan – you can take something form this application; even more, it has full support in English, French, German, Italian, Spanish and Swedish, as well as videos from CERN, an animated step-by-step walkthrough of how the LHC works and 3D simulations of real collisions. If you’re feeling more adventurous, there’s even a game called ‘The hunt for the Higgs Boson’ – a game a lot of the scientific community is playing, actually.