by Mihai Andrei
in Mathematics, Physics
Reading Time: 3 mins read
A A
Share on FacebookShare on TwitterSubmit to Reddit

What you’re seeing above is the Hofstadter’s butterfly – a mathematical object describing the theorised behaviour of electrons in a strong magnetic field. It took physicists 40 years, but they have finally found experimental evidence that the model, proposed in 1976 by Douglas Hofstadter is valid. 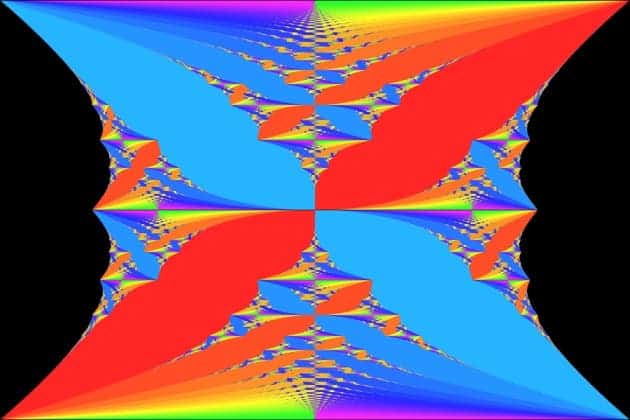 Thing is, to catch this kind of fractal butterfly, you need a special type of net. Since May, several groups have been working on (and published) experiments that sought the pattern using hexagonal lattices of atoms, and just a month ago, others reported seeking it with atomic laser traps. Proving and understanding the validity of the Hofstadter butterfly could help in the development of materials with exotic electric properties. But of course, proving a theory so ahead of its time is a major achievement in itself.

“Hofstadter’s concept was initially disturbing to a lot of people,” says Cory Dean, an experimental physicist at the City College of New York. “Now we can say his proposal wasn’t so crazy after all.”

Hofstadter, one of the most brilliant mind off the face of the Earth, abandoned physics not long after proposing this model, moving on to computer science – where his work was also valuable. He also won the Pulitzer prize for nonfiction with his book – Gödel, Escher, Bach: an Eternal Golden Braid, and is now working as a professor of cognitive science whose research focuses on the sense of “I”, consciousness, analogy-making, artistic creation, literary translation, and discovery in mathematics and physics.

He sketched this model while he was still a graduate student in physics; since then, it was known that electrons under the influence of a magnetic field tend to race around in circles, but Hofstadter showed that if you put the electrons inside a crystalline atomic lattice, their motion becomes much more complicated. As the magnetic field increases more and more, the energy levels that define the motion of electrons split again and again; when you graph those energy levels, the result is the fractal butterfly.

The idea is difficult to test, as the required strength of the magnetic field is quite high, and it depends on the spacing between the atoms in the lattice. After applying the necessary field, the researchers reported discrete, but relevant changes in the conductivity of the composite material — stepwise jumps that result from splits in the energy levels of its electrons. These are not necessary direct indication of the butterfly, but as good as an indirect clue as you’re ever gonna get.

“We found a cocoon,” says Pablo Jarillo-Herrero, an experimental physicist at the Massachusetts Institute of Technology (MIT) in Cambridge. “No one doubts that there’s a butterfly inside.”

It’s so incredibly satisfying to see a mathematical theory from the 70s confirmed by experimental measurements in 2013… Ok guys, I’m gonna say it: science is awesome!