Developing a new type of glue

by Mihai Andrei
in Nanotechnology, Physics
Reading Time: 3 mins read
A A
Share on FacebookShare on TwitterSubmit to Reddit

Over the past decades, what we mean by glue has changed significantly; techniques have emerged, materials have been developed, and one of the most viable candidates for a superglue is gold. Researchers have found numerous applications for attaching molecules to gold; the approach uses chemicals called thiols to bind the materials together. But while this technique was very promising, especially in electronics, it has some severe limitations. An MIT team claims they have developed a material which overcomes those limitations. 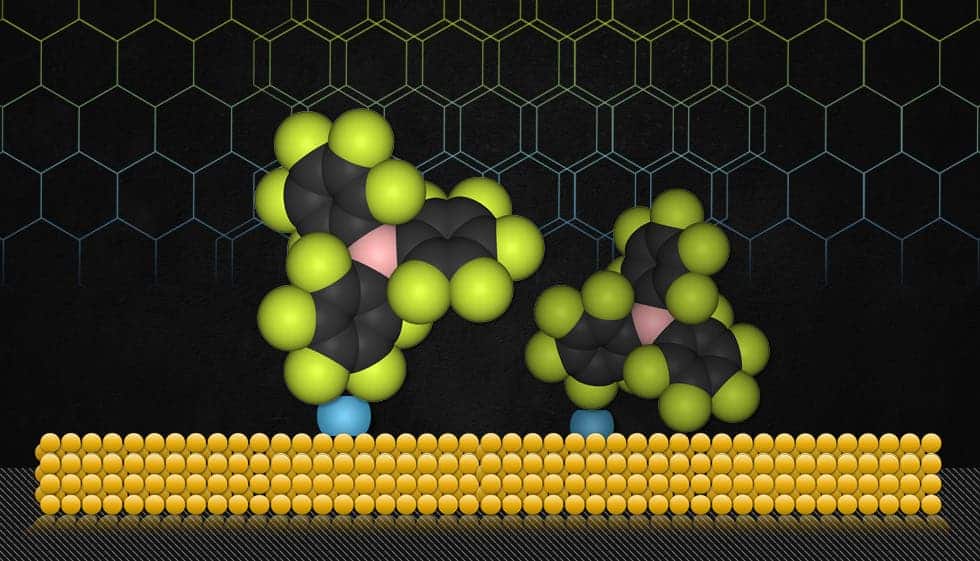 They use molecules called carbenes to attach other substances to gold — and potentially to other material surfaces as well. A carbene is a molecule containing a neutral carbon atom with a valence of two and two unshared valence electrons. The work, led by assistant professor of chemistry Jeremiah Johnson, has been published in the Journal of the American Chemical Society.

As they explain, thiols are very limited in that the binding is very weak, and can be easily broken when heated and the connection does not typically conduct electricity well – two setbacks severely limiting use in electronic devices.

The MIT team envisioned that certain carbenes can overcome both hurdles, taking technology one step closer to molecular electronics.

“You could scale electronic components down to the molecular level by wiring a molecule between two electrodes,” he says. “It would be the smallest possible component.”

Carbenes — specifically, a type the MIT team calls addressable N-heterocyclic carbenes (ANHCs) — may provide such a generalized solution. It was already well documented that carbenes can easily glue to a number of surfaces, but now, the team has used them as “surface anchors” to link many compounds to many different surface materials — a process known to chemists as “functionalizing” the surface.

“I can count on one hand the number of methods you can use to functionalize surfaces, and they are different for different surfaces. If we could find a general one, that could make a big difference.”

The first application could be in biosensors, for example. A molecule could be designed to bond to a specific marker attached to a gold wire, activating a circuit. It could also be used to create cheap coatings, because the materials and technique have the potential to be really cheap.

Another very interesting application, that is stil rather a theory, would be binding them to tumour cells. The particles would be then heated with infrared. The idea of using gold to fight cancer is not new, and has been proposed previously by other teams.

While this may be a little far fetched, the technique has lots of potential because “it’s cheap to make, and you can make it at large scale,” Johnson says.

Brent Segal, chief scientist for nanotechnology at Lockheed Martin’s Advanced Technology Center in Billerica, Mass., says this work “represents a shift in the paradigm for attachment chemistry to metal atoms.” He adds that:

“When I first learned of the approach, I said, ‘Finally!’ It seems as if someone might have come across something like this previously, but in terms of novelty, Johnson and his team have really executed beautifully to work out details for a viable system approach.”

But let it be clear – this is still in the development phases. There are still many, many obstacles to be surpassed:

“As is often the case, this is still quite early-stage work and will have various hurdles yet to overcome. Scaling up the material and understanding the limitations of performance in various solutions … will be paramount.”