It’s one of the rarest meteorological phenomena, and it’s truly spectacular: a fire rainbow delighted beachgoers in South Carolina, being photographed dozens of times and posted to social media. 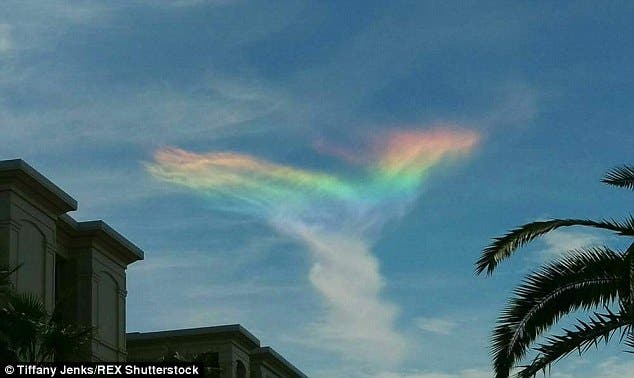 The term “fire rainbow” is actually misleading – the correct term would be circumhorizontal arc, but that just doesn’t sound so good. It’s basically an ice halo formed by ice crystals located very high, in the cirrus clouds. This flamboyant display of colors can be typically seen several times a year in the US, though it’s much rarer in Europe and Asia.

The phenomenon is similar to brightly colored sunsets; the difference to when you see all those bright colors at sunset is that here the entire light diffraction occurs on one single cloud, painting it as a rainbow. It takes very specific conditions for circumhorizontal arcs to form.

‘To produce the rainbow colours the sun’s rays must enter the ice crystals at a precise angle to give the prism effect of the color spectrum,’ Lock said, adding the sun must be at an altitude of at least 58 degrees above the horizon.