Bringing back the “cold fusion” dream

In 1989, Stanley Pons and Martin Fleischmann made a sensational claim that would have forever changed the world we live in – if it had been true. They claimed to achieve nuclear cold fusion at room temperature using a relatively simple device, thus creating a safe, clean source of energy. 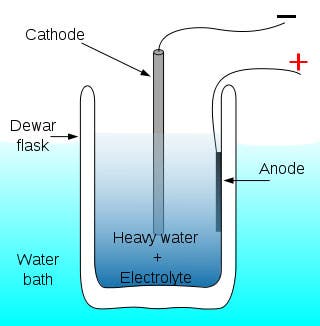 Unfortunately for them, multiple attempts were made to replicate their experiments, but they all failed; furthermore, there wasn’t (and still isn’t) any scientific model which could explain cold fusion. So their reputations dwindled down, and sadly, they became a subject of satire. But quietly and steadily, 20 years later, two of the most respected scientific institutions in the world, NASA and the European physics research center CERN have revisited the experiment and came to the conclusion that the experiments could actually held promises for the future.

A growing number of scientists now suspect that Pons and Fleischmann’s observations were not the result of cold fusion, but rather the result of a more plausible physical phenomena – and some of them believe the process could in fact be used to generate significant amounts of clean energy.

“There’s enough evidence that says we need to look at this,” says Joseph Zawodny, a physicist at NASA’s Langley Research Center in Virginia.

The man who paid the most interest to this phenomena is Lewis Larsen. He tried replicating the experiment, which basically consisted of palladium rods, connected to an electric current and immersed in lithium-enriched water, but received mixed results. The idea was that the rods would give away more energy in the form of heat than they received in the form of energy. As I said, he got mixed results; sometimes they would give out more, sometimes less, but one question kept bugging him: if the device really was giving away more energy, where could this energy come from?

Pons and Fleischmann’s infamous explanation, which ultimately brought their demise in the scientific community was that hydrogen nuclei were fusing inside the metal rods. That’s a big claim, and one which practically any physicist will tell you is flawed: fusion takes enormous amounts of heat to take place. But Lewis sought a different explanation.

He recruited Allan Widom, a very respected and well known physicist, and together, they embarked on this quest. What they found was truly interesting; a film of negatively charged electrons covering the palladium could combine with positively charged protons from the water’s hydrogen atoms to form chargeless neutrons. These neutrons would then be absorbed by lithium nuclei, disturbing the equilibrium which keeps the nucleus together, and therefore, the lithium nucleus would rapidly decay first into beryllium and then into helium, and emit radiation. Ultimately, the film of electrons would absorb the radiation and reemit it as heat. Widom and Larsen stood by this theory, calling it low-energy nuclear reaction, or LENR – practically, a more acceptable version of cold fusion. They published it in 2006.

The article didn’t make a splash at the time; scores of more or less dubious publications had been made in an attempt to explain “cold fusion”, but this one had more going for it. Not only did it have the reputation of Widom and Larsen behind it, but it explained all using accepted physics – no unverifiable claims were made. Pretty soon after that, NASA released details on a $200,000-a-year research program on LENRs.

Could it actually work?

Yes, it could work. There’s no reason to believe it couldn’t. But it could also fail, and there’s no reason to believe it couldn’t fail either. Basically, the theory relies greatly on circumstantial evidence, and the experiments on LENR are really hard to replicate with consistent results. But perhaps this funding is all that’s needed to solve this puzzle. Dennis Bushnell, chief scientist at NASA Langley, wrote in an online article that LENRs could potentially satisfy the world’s energy needs at a quarter the cost of coal – and that’s a big WOW!

We’ll keep you posted on any developments on the matter, though we really shouldn’t expect any major breakthroughs any time soon. But if it works out, this is probably tomorrow’s source of energy.