by Tibi Puiu
in News, Physics
Reading Time: 3 mins read
A A
Share on FacebookShare on TwitterSubmit to Reddit

A group of Chinese physicists, working with international collaborators, have announced their plans of building a  52-kilometre underground particle accelerator that would smash together electrons and positrons to unravel the fundamental building blocks of life. The project would offer means of probing these sort of fundamental questions that are unavailable to the Large Hadron Collider at CERN, an oval-shaped 26km underground tunnel where the famous Higgs boson was confirmed. Physicists say that the proposed US$3-billion machine is within technological grasp and could be ready by 2028. More importantly, however, the upcoming particle accelerator will become the first stepping stone for a much grander and ambitious project – a super collider.

The super collider that never was

European and US teams have both shown interest in building their own super collider, but the huge amount of research needed before such a machine could be built means that the earliest date either can aim for is 2035. In fact, the US planned a building something like this in 1993 – the  Superconducting Super Collider (SSC)  or Desertron, as it was nicknamed, in Texas. Its planned ring circumference was 87.1 kilometres (54.1 mi) with an energy of 20 TeV per proton or 40 TeV collision energy. This would have made it eight times more powerful than the Large Hadron Collider at CERN, but Congress eventually canceled the project after it contested its utility and $2 billion had already been spent.

Now, China is inclined to make this giant leap which will put the country at the very forefront of particle physics, according to the announcement made by the country’s Institute of High Energy Physics. The country wants to  work towards a more immediate goal than a super collider by 2035, however, and in the meantime it plans on building an electron-positron collider, which should allow the Higgs boson to be studied with greater precision than at the much smaller Large Hadron Collider (LHC) at CERN. 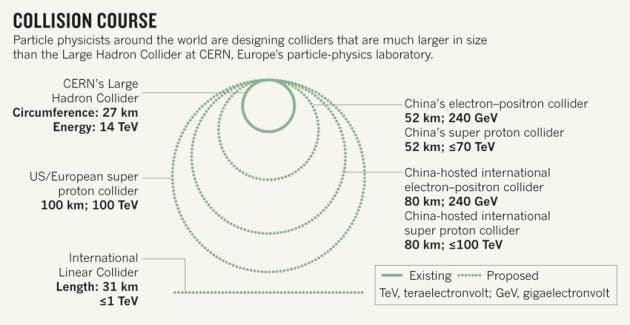 By examining in detail the interactions of the Higgs boson with other particles, the proposed Chinese collider should, for example, be able to detect whether the Higgs is a simple particle or something more exotic. This kind of data will help researchers tell whether the God particle – the fundamental particle thought to be responsible for granting mass to matter – fits within predictions made by the standard model of particle physics, or whether, for example, multiple types of Higgs boson exist.

For China, this is a huge leap forward and some are questioning whether the country wants to bite more than it can chew. China’s largest particle accelerator is only 240 meters long and only ten years ago China’s own physicists would have thought something like this out of reach. The country’s firm economic growth has changed all this and puts it in a position where it can commit to projects other countries can’t even dream of, including the US.

Used to isolation, China plans on building and operating the huge particle accelerator aided by international support, but officials said they don’t plan on waiting – if there isn’t any intention from the international community to help, they’re more than fine with working alone on this. Guido Tonelli, a particle physicist and former head of one of the two major experiments at CERN, says however that China will have to collaborate with the rest of the world if its project is to be a success because of its weakest point – manpower. While making remarkable advances, China’s particle physics community is yet to small to host and operate something as grand as a super collider. At CERN, for instance, physicists from all over the world are working there, including Europe, the US, Japan and, of course, China.

Realistically, only one super collider can be built in the world in the coming decades. As such, the world NEEDS to collaborate to make sure this project finds ist best home and leaders. Physics is not about politics.