by Tibi Puiu
in Physics
Reading Time: 3 mins read
A A
Share on FacebookShare on TwitterSubmit to Reddit 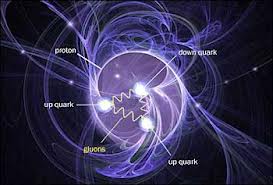 Not one, but two independent high-energy particle physics laboratories in New York (Relativistic Heavy Ion Collider – RHIC) and Geneva ( Large Hadron Collider – LHC) have managed to create quark-gluon plasma after smashing particles into another at very high speeds. The resulting plasma, which only lasted for a fraction of a moment,  is the hottest matter ever recorded – somewhere between 4 trillion and 6 trillion degrees Celsius.

“We now have created matter in a unique state, composed of quarks and gluons that have been liberated from inside protons and neutrons,” said Steven Vigdor, a physicist at Brookhaven National Laboratory, which hosts the RHIC.

Any proton or neutron, the building blocks of an atom, is made out of three quarks bound together by gluons, which are mass-less and hold the quarks together like a sort of glue. After colliding lead ions at extremely high velocities, a quark–gluon plasma was created, denser than a neutron star and the hottest man-made matter ever. This subatomic soup and unique state of matter is thought to have existed just moments after the Big Bang. Evidently, better understanding this incipient phase of the Universe would help unravel a number of secrets.

Scientists theorize that during a similar state to the one experimented by scientists at both RHIC and CERN, quarks and gluons would have combined to form protons and neutrons, which would have grouped with electrons a while later to form atoms. Eventually, this would latter on form cosmic dust, gas and lead to the birth of cosmic bodies like stars, galaxies and so on.

Concerning the exact temperature at which the matter was recorded, things aren’t exactly certain yet. One can imagine, keeping in mind the extremely fast decay time and record breaking temperature levels, that measuring such an experiment requires technology and innovation at the forefront of science. Spokesmen from ALICE,  a heavy-ion experiment and a lesser-known sibling to ATLAS (one of the teams which announced the Higgs boson discovery), say their data shows  an estimated 5.5 trillion degrees measured temperature or 100,000 times hotter than the center of the sun.  “It’s a very delicate measurement,” Paolo Giubellino, Alike spokesman says. “Give us a few weeks and it will be out.”

If you’re curious as to what’s the maximum possible temperature, well it is believed to be 1.416833(85) x 1032 Kelvin degrees, and at temperatures above it, the laws of physics just cease to exist

Brookhaven’s Relativistic Heavy Ion Collider (RHIC) have been studying the plasma from 2005, around the time when the first experiments were conducted. In terms of properties, they found that the plasma behaves like perfect, frictionless liquids. Meaning zero viscosity – no friction! This plasma is also extremely dense, with particles packed in more tightly than neutron stars.

“We do have now the tools in place to really experiment with it …and figure out precisely what kind of stuff this really is and why it has these extraordinary properties,” said Jurgen Schukraft, a physicist at the CERN physics lab in Geneva, home of the LHC.

Findings were published in Nature.