by Mihai Andrei
in Geology, Physics
A A

Geophysical data from Greenland have revealed the existence of a canyon comparable in size with the Grand Canyon beneath the ice sheet. 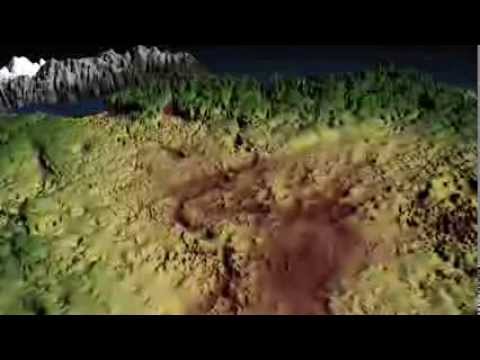 The canyon has the characteristics of a winding river channel and is over 750 km long and it is often as deep as 800 m. This immense feature is thought to predate humanity – it came to be several million years before the Antarctic ice sheet was developed.

“One might assume that the landscape of the Earth has been fully explored and mapped,” said Jonathan Bamber, professor of physical geography at the University of Bristol in the United Kingdom, and lead author of the study. “Our research shows there’s still a lot left to discover.”

Scientists used thousands of kilometers of airborne radar data collected by NASA and researchers from the United Kingdom and Germany over several decades, and managed to puzzle together the main characteristics of the Greenland canyon. They found that the geologic feature starts from almost the center of the island and ends beneath the Petermann Glacier fjord in northern Greenland.

At certain wavelengths, radar waves can travel through the ice, but bounce off the solid rock underneath. This enables us to map the depth of the canyon – the longer it takes for the wave to return, the deeper the canyon is.

“Two things helped lead to this discovery,” said Michael Studinger, IceBridge project scientist at NASA’s Goddard Space Flight Center in Greenbelt, Md. “It was the enormous amount of data collected by IceBridge and the work of combining it with other datasets into a Greenland-wide compilation of all existing data that makes this feature appear in front of our eyes.”

“It is quite remarkable that a channel the size of the Grand Canyon is discovered in the 21st century below the Greenland ice sheet,” said Studinger. “It shows how little we still know about the bedrock below large continental ice sheets.”

For more information about IceBridge, the operation which led to this discovery, check out their website. The IceBridge campaign will return to Greenland in March 2014 to gather more data and develop a more conclusive picture of the subglacial features in Greenland.