The experiment: two identical glass beakers filed with deionized water are put into contact. A voltage is applied ( 10,000 to 15,000 volts DC ) to the water inside the beakers and these glasses are slowly moved apart. An amazing physical phenomenon is then observed – a water bridge between the two beakers is formed, as water flows from one side to the other without anything containing it.

This experiment has been performed numerous times, and to explain it scientists have proposed several theories. There are two leading theories: the direct voltage keeps the water molecules lineup keeping the bridge from collapsing  (the electric field creates a highly ordered microstructure) and, second, that surface tension keeps the water aloft.  Reza Namin at the Sharif University of Technology in Tehran and colleagues found that actually both theories are correct as both physical phenomenae work together in this gravity defying act.  Video demonstration below: 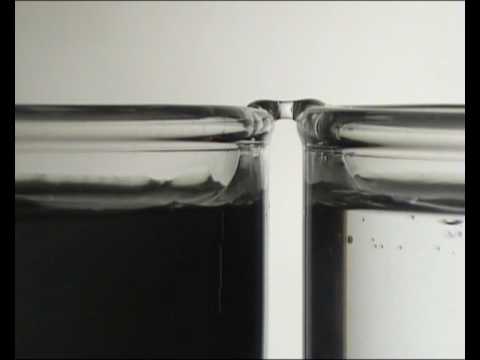 The scientists performed a numerical simulation of the electric field and calculated the forces involved. Their simulation was on par with the experimental observations – the force that supports the WB is the surface tension of water and the role of electric field is not to allow the WB to reduce its surface energy by means of breaking into separate drops.

If you want to try to make this experiment at home, it’s enough to have an electrode inserted into each water beaker. The water needs to be deionized otherwise the bridge won’t form (no salt!).  The water in the bridge does heat up, and shown by a themographic camera: