It's one of the coolest selfies out there -- it was made in Antarctica.

by Alexandru Micu
in Animals, News, Offbeat, Science
A A

Curiosity may have killed the cat, but just recently, it also selfied the penguin.

Eddie Gault was born and raised in Australia, but his passion took him far away from the heat of the Land Down Under, and into the frigid winds of the poles. And lucky us, because his latest expedition to the Antarctic made this gem of photography possible. The image was captured at the Auster Rookery near Australia’s Mawson Antarctic research station — Australia’s first continental station and the longest continuously operating station south of the Antarctic Circle.

By all accounts, this selfie was the product of a happy accident — Gault left the camera on the ice when visiting the rookery, and it soon attracted the birds, curious to see what’s what.

“It didn’t take long for the naturally curious birds to seize the opportunity for a selfie,” explained the Australian Antarctic Division.

One penguin waddled up to the camera, knocked it over, and then looked down at the objective; likely, as it was checking out its own reflection on the objective. Soon, one of his companions joined him, setting the stage for this amazing image. And I think we can all be glad that they did. You can see the whole encounter here: 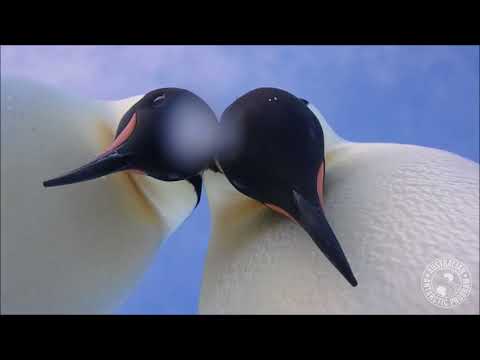 The selfied penguins are Emperor penguins (Aptenodytes forsteri). They’re the largest penguins of the bunch and are native to Antarctica. They’re also the only beings known to breed during the Antarctic winter, when temperatures can drop down to a frigid -50° Celsius (-58° Fahrenheit).

Thousands of penguins call Auster Rookery their home, and come here to find a mate and rear their chicks. It’s one of around 40 such colonies on the continent of Antarctica. One of the Australian Antarctic program’s central objectives is to study the lives of these penguins, and understand how human activities affect them. Emperor penguins are looking at rough times ahead due to the effects of climate change.