by Mihai Andrei
in Climate, Oceanography
A A 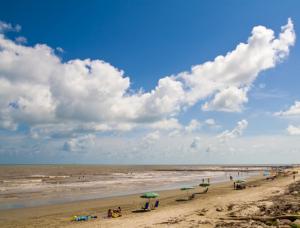 As sea levels rise coastal communities could lose up to 50 percent more of their fresh water supplies than previously thought, according to a new study from Ohio State University. This is not just bad news for them; it is a warning for everybody.Studies have shown how altwater will intrude into fresh water aquifers, given the sea level rise predicted by the Intergovernmental Panel on Climate Change (IPCC). The results were very discouraging; sea level could rise as much as 23 inches, flooding coasts worldwide in the next 100. This argues with what they believed before that as saltwater moved inland, it would penetrate underground only as far as it did above ground.

But the research they have made obviously shows that when saltwater and fresh water meet, they mix in complex ways, depending on the texture of the sand along the coastline and things are not as easy as they seemed. Just as saltwater, brackish water is not safe to drink because it causes dehydration. Graduate student Jun Mizuno said that “Almost 40 percent of the world population lives in coastal areas, less than 60 kilometers from the shoreline,” and These regions may face loss of freshwater resources more than we originally thought.”.

The further increase in sea level makes things even harder to predict. But what is certain is that water is getting scarcer with every passing year. “In order to obtain cheap water for everybody, we need to use groundwater, river water, or lake water,” Ibaraki said. “But all those waters are disappearing due to several factors –including an increase in demand and climate change.”. We could desalinate saltwater but that would be very expensive.