by Tibi Puiu
in Electronics, Science
A A 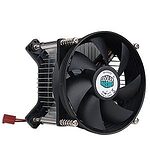 Researchers at  North Carolina State University have developed a new technique of cooling electronic devices which they claim and prove through their findings that it can lead to an increase of performance by improving the rate of heat exchange, while also lowering the cost of manufacturing. The scientists’ findings might lead to a new generation of more efficient heat sinks, as well as better cooling for devices that generate a lot of heat, such as lasers and power devices.

The technique is centered around what the researchers call a “heat spreader”, a copper-graphene composite, which is attached to the electronic device using an indium-graphene interface film. Together, the materials provide a much higher thermal conductivity than the conventional lonesome copper used ubiquitously for standard cooling of electronic devices. To be more precise, copper-graphene composite films with thickness greater than 200 microns showed an improvement in thermal conductivity over that of electrolytic copper from 380 W/m.K to 460 W/m.K at 300 K – more than 20%.

Besides the remarkable improvement in thermal conductivity, the researchers point out that the copper-graphene composite is also low-cost and easy to produce, using an electrochemical deposition process “Copper is expensive, so replacing some of the copper with graphene actually lowers the overall cost,” conclude the researchers.

Their findings have been published in the journal Metallurgical and Materials Transactions B.