The US lags behind all the developed world, and the situation in Texas is unmatched. 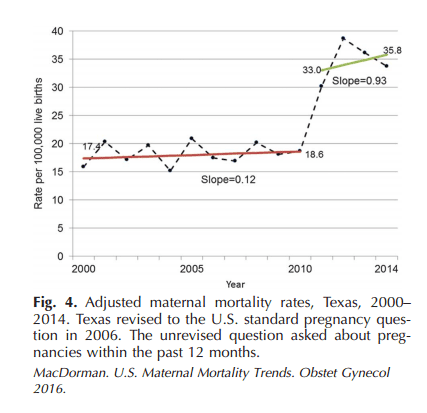 We’re not used to talking about issues with maternal mortality in the developed world because it rarely rises, and even such rises aren’t dramatic. The United Nations Millennium Development Goal for a 75% reduction in maternal mortality from 1990 to 2015 is being accomplished in most of the world, with levels dropping significantly throughout Europe, Australia and some parts of Asia.

In the US, however, things aren’t looking so bright – the maternal mortality rate in the States increased from 18.8 in 2000 to 23.8 in 2014, a 26.6% increase. In Texas especially, results are puzzling. The rate has steadily grown from 2000 to 2010 and then quickly doubled in 2011-2012. The researchers called for further study to examine this unprecedented increase (in the absence of war, famine or other catastrophic events).

With their anti-abortion and anti-family-planning policiesTexan policies are killing mothers, and the situation is extremely worrying. Authors urge policymakers to promote new efforts and improve maternity care.

“In conclusion, the maternal mortality rate for 48 states and Washington, DC, from 2000 to 2014 was higher than previously reported, is increasing, and places the United States far behind other industrialized nations.

There is a need to redouble efforts to prevent maternal deaths and improve maternity care for the 4 million US women giving birth each year,” the authors said.