A Yellow Meranti tree that towers at about 89.5m tall was discovered by Cambridge researchers in Malaysia.

A Yellow Meranti tree that towers at about 89.5m tall was discovered by Cambridge researchers in Malaysia. Air reconnaissance above the Maliau Basin Conservation Area initially tracked the huge tree, then an expert climber literally used a ruler to confirm the giant does indeed stand taller than any other tree in the Tropics.

Conservationists from Cambridge were working closely with staff from the Sabah Forestry Department to help protect the forest biodiversity when they stumbled across the Yellow Meranti. Surveying the forest from a helicopter, a LiDAR scanner fired 200,000 laser pulses every second, calculating distances in 3D from each reflected pulse. Back at home base, researchers then stitched these images together to make an accurate 3-D map of the forest tree by tree.

They were immediately struck by the height of one lonesome Meranti — this was a special find.

You can measure a tree with instruments like lasers, but when you want to be absolutely sure you’re dealing with a record-breaker, the old fashion way is the norm. Unding Jami, an expert tree-climber from Sabah, was enlisted to climb to the very top of the Yellow Meranti drop a huge ruler.

“I don’t have time to take photos using a good camera because there’s an eagle around that keeps trying to attack me and also lots of bees flying around,” Jami said.

Measurements revealed the tree was 91 meters tall downhill and 88 meters tall uphill. So, the researchers solved this the scientific way: average it out. That’s 89.5m, which is enough to marginally beat the previous record holder, another Yellow Meranti 88.3m tall from the Tawau Hills National Park.

The news couldn’t come at a better time. The Yellow Meranti (Shorea faguetiana) is listed as endangered on the International Union for Conservation of Nature ‘Red list’. Ironically, there are more Yellow Meranti trees in Minecraft, a game that allows players to grow it, than in the real world. 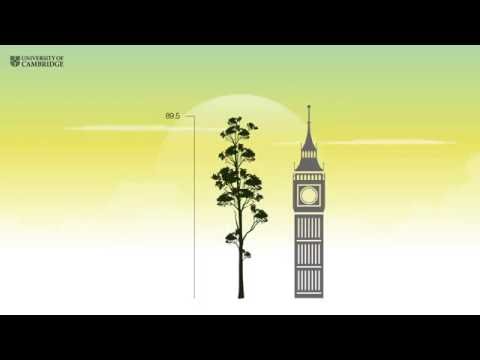 “Conserving these giants is really important. Some, like the California redwoods, are among the largest and longest-living organisms on earth. Huge trees are crucial for maintaining the health of the forest and its ecology. But they are difficult to find, and monitor regularly, which is where planes carrying LiDAR can help,” said Dr David Coomes, from Cambridge’s Department of Plant Sciences.

“The discovery of this particular tree comes at a critical moment because, set against a backdrop of decades of forest loss, the Sabah government has decided to protect and restore a huge tract of heavily logged forest just to the east of the Maliau Basin. It’s exciting to know that these iconic giants of the forest are alive and well so close to this major restoration project,” he added.

Today, the tallest tree discovered so far is the Hyperion located in Redwoods, California, which measures 115.61 m, has a diameter of 4.84 m, is between 700 and 800 years old and belongs to the Sequoia sempervirens species. As an interesting fact, all of the top ten tallest trees in the world are in California, and four out of the top five trees are in Redwoods.