The same should happen six billion years from now when the Milky Way merges with Andromeda.

For the first time, astronomers have observed pairs of galaxies in the final stages of merging into a single, larger galactic body. The findings suggest that such events are more common than astronomers used to think.

Black holes likely reach this sort of dizzying size through the merger of galaxies. However, evidence has been conflicting due to a lack of direct imaging of the process, which is obscured by swirling clouds of gas and dust. What’s more, simulations show that the more these galaxies progress in their merger, the greater the concealment effect.

To peer through all the matter that obscures supermassive black holes, scientists combed through a huge catalog of 10 years’ worth of X-ray measurements taken by the Burst Alert Telescope (BAT) aboard NASA’s Neil Gehrels Swift Observatory.

“The advantage to using Swift’s BAT is that it observes high-energy, ‘hard’ X-rays,” said study co-author Richard Mushotzky, a professor of astronomy at the University of Maryland. “These X-rays penetrate through the thick clouds of dust and gas that surround active galaxies, allowing the BAT to see things that are literally invisible in other wavelengths.”

Next, the research team analyzed another catalog of galaxies from NASA’s Hubble Space Telescope and the Keck Observatory in Hawaii whose X-ray signatures matched the Swift readings.

The breakthrough lied with the Keck Observatory’s adaptive optics technology whose deformable mirrors controlled by a computer enable a phenomenal increase in resolution. Using this tech, researchers were able to produce extremely sharp, near-infrared images of X-ray-producing black holes not found in the Hubble archive.

“People had conducted studies to look for these close interacting black holes before, but what really enabled this particular study were the X-rays that can break through the cocoon of dust,” explained Koss. “We also looked a bit farther in the universe so that we could survey a larger volume of space, giving us a greater chance of finding more luminous, rapidly-growing black holes.” 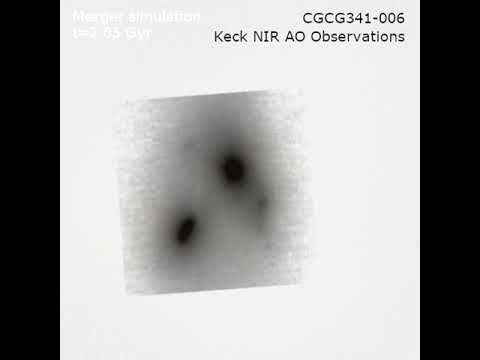 In total, 96 galaxies were observed with the Keck telescope and 385 galaxies from the Hubble archive. According to the results, 17 percent of these galaxies host a pair of black holes at their center, which are locked in the late stages of a galactic merger. This was surprising to learn since previously simulations suggested that black hole pairs spend very little time in this phase.

“Seeing the pairs of merging galaxy nuclei associated with these huge black holes so close together was pretty amazing,” said Michael Koss, co-author of the new study published in the journal Nature. “In our study, we see two galaxy nuclei right when the images were taken. You can’t argue with it; it’s a very ‘clean’ result, which doesn’t rely on interpretation.”

The findings suggest that galactic mergers may indeed be a key process by which black holes grow to stupendous masses. And the stages that the astronomers have mapped out in this study likely foretell the fate of our very own galaxy. In about 6 billion years, scientists estimate that the Milky Way will merge with the Andromeda galaxy into one big galaxy.

There is still much to learn about black hole mergers, though. Right now, hardware is a huge limitation, but, once the James Webb Space Telescope is deployed in 2021, scientists will be able to measure masses, growth rates, and other physical parameters of black hole pairs.