For the first time, scientists have calculated the speed at which a viper strikes

It's not just the predator - the prey plays a big role too.

by Mihai Andrei
in Biology, News
Reading Time: 3 mins read
A A

The antagonistic relationship between predator and prey has been a main driver of evolution for hundreds of millions of years. As a result, some animals have developed extreme adaptive mechanisms (think of the chameleon’s tongue or the cheetah sprinting). Now, researchers studying the rattlesnake-kangaroo rat system have shown how this evolutionary arms race has shaped the two creatures. 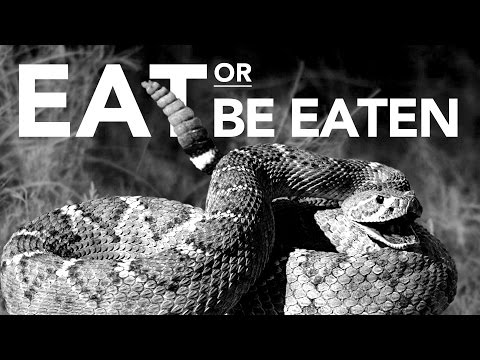 It’s surprising, but we don’t really know that much about the strike performance of most snakes. Most studies were conducted in laboratories, but conditions in labs aren’t really similar to nature. Timothy Higham at the University of California, Riverside set out to study snakes in their natural environment. He explains:

“Predator-prey interactions are naturally variable — much more so than we would ever observe in a controlled laboratory setting,” said Higham, an associate professor of biology, who led the research project. “Technology is now allowing us to understand what defines successful capture and evasion under natural conditions.  It is under these conditions in which the predator and prey evolve.  It’s therefore absolutely critical to observe animals in their natural habitat before making too many conclusions from laboratory studies alone.”

They set up high-speed video (500 frames per second) in the wild, finding that the rattlesnakes have a wide range of strike speeds and accelerations but these don’t appear linked to capture success. Furthermore, they found that snake strikes were up to 36% faster than those observed in the lab. Kangaroo rats also performed better than expected, exhibiting lightning fast reflexes.

“The escape response and behavior of the kangaroo rats were equally impressive, and we provide some of the first data regarding escape performance of small mammals during natural interactions,” the study writes. “The average response time, from the onset of snake movement to the first observable motion of the kangaroo rat, was 61.5 ± 10.6 ms, which is at the lower end of the mammalian startle response.”

So it’s not just how fast or accurate the snake is, the rats also have a big part to play. No matter how fast the snake is, the rat still has a chance to escape it. They can make long, fast escapes by gaining extra energy. They do this by storing elastic energy in their tendons, allowing the tendons to recoil like an elastic band being released from the stretched position – somewhat like a slingshot.

“We obtained some incredible footage of Mohave rattlesnakes striking in the middle of the night, under infrared lighting, in New Mexico during the summer of 2015,” Higham said. “The results are quite interesting in that strikes are very rapid and highly variable. The snakes also appear to miss quite dramatically — either because the snake simply misses or the kangaroo rat moves out of the way in time.”