Your romantic partner probably isn’t as smart as you think

People tend to over-estimate their spouse's intelligence (as well as their own).

by Tibi Puiu
in News, Psychology
Reading Time: 2 mins read
A A
Share on FacebookShare on TwitterSubmit to Reddit

Most people think they’re smarter than most people — and this tendency to overestimate our abilities can spill over to our loved ones. According to a new study, we generally perceive our romantic partner as more intelligent than they actually are.

For their study, researchers at the University of Western Australia and the University of Warsaw recruited 218 heterosexual couples, who had been together for an average of six years. Each participant had to estimate their own intelligence and that of their romantic partners using a graphical scale, which ran from “very low” to “very high.” These estimates were converted into IQ points based on the bell curve statistical distribution of intelligence, where the peak of the bell curve (or median IQ) sits at 100 points.

Each participant also completed a standard test of nonverbal intelligence known as the Raven’s Advanced Progressive Matrices in order to gauge their actual IQ score.

Similarly to other studies, the researchers concluded that most of the participants vastly overestimated their intelligence, by an average of 30 points. Although most participants scored themselves above average, 68.8% of women and 55% of men scored below 100 IQ points. 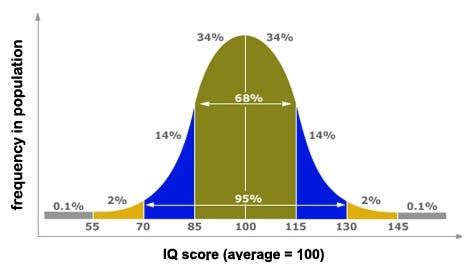 The authors of the study were also interested to find out whether or not people tended to get romantically involved with partners of similar intellect. The researchers found a moderate correlation between the partners’ actual IQ scores, suggesting that people generally hook up with partners of matching intelligence. This may be due to the fact that people of similar intelligence may also be more likely to share a common background. For instance, a lot of couples start dating in school or a work environment.

Although this wasn’t the object of the study, the ‘halo effect’ may also have played a role in the participants’ over-estimation of their loved one’s intelligence. The halo effect is the phenomenon whereby we assume that because people have a good trait, their other traits must also be favorable. Frequently we fall prey to this effect by overvaluing some of a person’s certain attributes while undervaluing others. In this case, if the spouse is caring or nurturing, the partner might also tend to attribute other favorable traits, such as above average intelligence.

The findings appeared in the journal Intelligence.