Rocks collected by the new rover will be transported to Earth.

NASA recently announced it will land its Mars 2020 rover in Jezero Crater. The 45-km-wide site was once filled with water and features rich geology that could tell scientists a lot of things about the planet’s troubled history. There’s also a chance that the rover mission might find evidence for past life on the Red Planet.

Jezero Crater sits on an ancient river delta, just north of the Martian equator on the western edge of Isidis Planitia. The crater was formed billions of years ago by a meteorite impact and, at one point, became filled with water to a depth of about 250 meters. Although the water is long gone, sediments at the site could still contain a record of microbial life — if any existed in the first place.

“The delta is a good place for evidence of life to be deposited and then preserved for the billions of years that have elapsed since this lake was present,” Mars 2020 project scientist Ken Farley said during a press conference.

Carbonate rocks present at Jezero may also tell us how surface water and the Martian atmosphere interacted billions of years ago. In fact, it is Jezero’s diverse geology that distinguished it from other potential landing sites for the 2020 rover. NASA had also considered Northeast Syrtis, which contains some of the oldest rocks on Mars, and Columbia Hills, which the Spirit rover explored between 2004 and 2011.

Jezero is also more accessible than the other sites, although that doesn’t mean that touchdown will be a piece of cake. NASA is doing everything it can to minimize the risk of landing the rover in a boulder field, a sand trap, or on the edge of a cliff.

“Getting samples from this unique area will revolutionize how we think about Mars and its ability to harbor life,” Thomas Zurbuchen, associate administrator for NASA’s Science Mission Directorate, said in a press release. 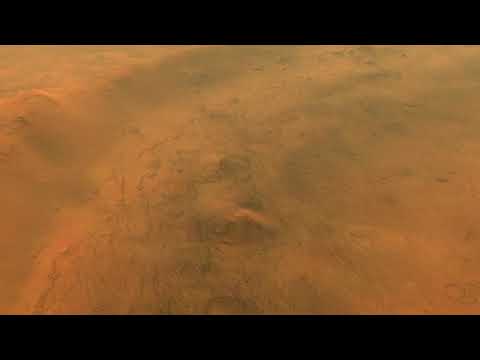 The $2.4-billion rover will launch in July 2020, landing on Mars seven months later, in February 2021. The six-wheeled, nuclear-powered Mars 2020 rover has almost the same design as NASA’s Curiosity rover, which has been operational on the surface of Mars for the past six years. Like Curiosity, Mars 2020 will be deployed on the Martian surface from a rocket-powered “Sky Crane” platform. NASA has also refined its landing technique, which means Mars 2020 should be better equipped to doge risky areas.

Unlike the Curiosity mission, Mars 2020 will also bring samples back to Earth. Although it’s not certain how this will happen, NASA says it hopes to send a new mission to Mars in the late 2020s to retrieve the rocks collected by the rover and return them to Earth by the early 2030s.

In the meantime, NASA has more immediate things to worry about. On 26 November, a robot called InSight will land on the surface of Mars, tasked with studying the Red Planet‘s interior.