Mind-controlled mice are forced to ignore food, water, and sex to complete maze

This was equally awesome and disturbing to watch.

Scientists hijacked the brains of lab mice by literally shining light into their neurons, making the rodents respond to external commands as if they were remote-controlled. When the mind-control setup was activated, the mice cared very little anymore about what they would normally be their favorite things to do — eat, drink, have sex. Their only preoccupation was to follow the researchers’ commands as they were directed to the end of a maze.

At the crux of this rather disturbing method lies a technique called optogenetics, which involves the use of light to control cells in living tissue, typically neurons, that have been genetically modified to express light-sensitive ion channels. Researchers at the Korea Advanced Institute of Science and Technology surgically implanted a little box on the skulls of engineered mice, which contained LEDs, a battery, and a Bluetooth-tethered microcontroller. A sophisticated machine-learning algorithm interpreted the instructions sent by the researchers into flashes of light which fired on and off at light-responsive proteins, altering their function.

During the experiment, a red ‘crave’ ball was attached by a flexible string right in front of the mouse’s field of vision. Yes, the old carrot-chasing trick. If the setup was deactivated, the mouse wasn’t at all interested in the ball. However, when it was activated, the mouse couldn’t help itself but follow the red ball, which could be steered, along with the rodent, by the researchers as they pleased.

The Korean researchers used this setup to steer the remote-controlled mice through a maze that was packed with obstacles and distractions at every turn. Along the way, the mice were tempted by delicious food, a female in heat or water. They also met obstacles like a narrow bridge over water or confusing road bumps that would have otherwise been intimidating for the mice. Despite these distractions, the researchers were able to steer the mice right to the end of the maze without the rodents ever flinching. 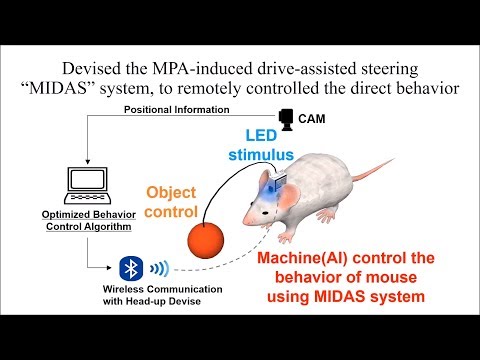 The team thinks that their method could be refined to enable precise control of biological organisms that are far more suitable, perhaps cheaper too, than robots for some select applications. For instance, one can imagine leveraging a mouse’s keen sense of smell for search and rescue missions or landmine detection.

This isn’t the first time scientists have taken control of animals. Other examples include worms, a cyber-cockroach, and a turtle. And I know what you’re thinking right now: If this can be done on mice, could the same technology be used on humans? That’s an interesting prospect to entertain, and it certainly doesn’t seem impossible in light of recent development.

The findings appeared in the journal Nature Neuroscience.