A medieval scribe curses a cat for peeing on his manuscript

Cats ruining things: a tale as old as time.

In 1420, a scribe in Deventer (the Netherlands) had a rather unpleasant day. He left the manuscript which he was working on open on the desk. It proved to be quite a mistake as when he returned, he found that a cat had urinated on his pages

This prompted a hilarious writing now preserved for posterity. 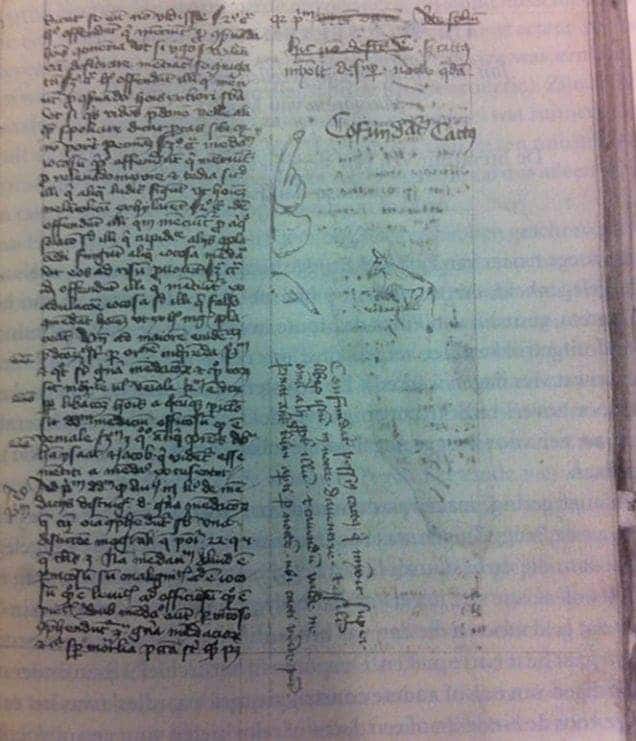 The Latin version reads thusly (don’t worry if your Latin is a little rusty, there’s an English translation below:

Here is nothing missing, but a cat urinated on this during a certain night. Cursed be the pesty cat that urinated over this book during the night in Deventer and because of it many others [other cats] too. And beware well not to leave open books at night where cats can come.

The scribe continued to write on the urinated pages, but one can only imagine the stench that impregnated the pages. He probably had more curses for the cat than the one he wrote down. The way the writing is arranged is also very telling: on the left, everything is ordered and neat, whereas on the right it looks more like a scribble than a proper text.

So given their inclination to ruin all things, why were cats allowed in medieval libraries in the first place? Especially since paper to write on was expensive and difficult to produce, this seems like an unwise idea. However, cats played a very important role: they defended the manuscripts from pesky rodents. This is brilliantly illustrated by a ninth-century poem, written by an Irish monk about his cat “Pangur Bán”:

I and Pangur Bán my cat,
‘Tis a like task we are at:
Hunting mice is his delight,
Hunting words I sit all night.

You can read the entire poem here.

If there’s any lesson to be learned here — don’t heave your manuscript open at night when there’s a cat around. As a matter of fact, don’t leave anything out. Looking directly at my cat-chewed headphone cable, I can only empathize with the scribe in Deventer.