It was a big one.

by Tibi Puiu
in Biology, Geology, News
Reading Time: 3 mins read
A A
Share on FacebookShare on TwitterSubmit to Reddit

An ancient penguin which lived 60 million years ago was far more intimidating than today’s charismatic tuxedoed birds. It was as big as a grown man, making it one of the largest semi-aquatic birds ever live on Earth. 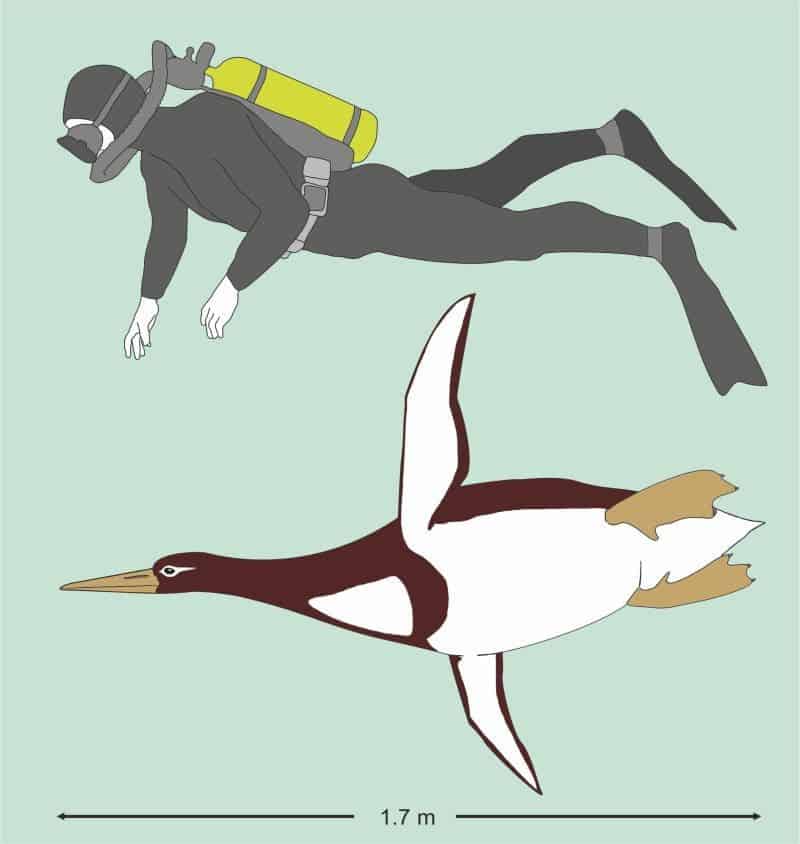 The partially-fossilized skeleton was unearthed from a beach, in the Otago region of New Zealand’s South Island. Researchers from Germany and New Zealand estimate it probably lived between 60 to 55 million years ago, based on the rock layers it was found in.

Scientists named the formidable giant penguin Kumimanu biceae — where “kumi” is a terrifying monster in Maori mythology and “manu” is the Maori word for “bird.”

By measuring Kumimanu’s bones and comparing them to the other ancient penguin remains, the researchers were able to estimate the bird could grow nearly 6 feet (1.8 meters) in length and 223 pounds (101 kilograms) in weight.

Giant penguins aren’t exactly new to science. Icadyptes and Inkayacu, which could grow 5 feet (1.5 meters) tall, roamed the coast of Peru 30 million years ago. Pachydyptes, another man-sized penguin found around New Zealand, was bigger still. Kumimanu tops all other giant penguins by at least 7 inches (18 centimeters). But what makes Kumimanu particularly exciting is its age — it’s the earliest giant penguin scientists have found so far.

Penguins evolved from flying birds tens of millions of years ago, but lost the ability to get airborne and became accomplished swimmers instead. Once grounded, some penguin species became much larger, growing from about 80cm tall to twice the size.

Penguins share a common ancestor with flying birds from which they diverged millions of years ago, losing the ability to get airborne but becoming accomplished swimmers instead. The penguins grew larger and larger and they did so rapidly, judging from the discovery of Kumimanu. After dinosaurs were wiped out 65 million years ago by a giant asteroid impact, so did many predatory marine reptiles, and the penguins were quick to seize the opportunity.

Concerning its appearance, Kumimanu was likely brownish and had a longer beak than its modern day black and white cousins.

“It would most likely have been slimmer too and not so cute looking,” said Gerald Mayr at the Senckenberg Research Institute and Natural History Museum in Frankfurt. “It’s one of the tallest penguins that has ever been found.”