Jupiter's getting ready for Halloween.

by Dragos Mitrica
in Astronomy, News, Space
A A

When a NASA spacecraft made a full rotation around Jupiter, it captured some eerie sounds.

NASA’s Juno spacecraft is doing its rounds nearby Jupiter, helping us better understand the planet as well as the formation of our solar system. While studying the planet’s aurora, Juno also tuned into the accompanying Jovian acoustic show. The radio emissions cast by Jupiter’s auroras were recorded by Juno, transformed into audible sounds by engineers at NASA, and of course, uploaded to Youtube. You can hear a sample here. 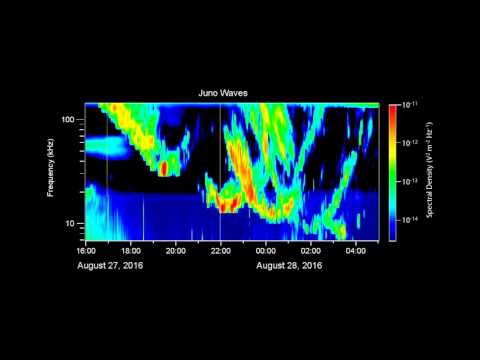 It’s not the first time such waves were recorded – astronomers knew about their existence since the 1950s, but never before have we been able to hear them from such a small distance. Juno is currently experiencing an unprecedented close-up with the gas giant.

“Jupiter is talking to us in a way only gas-giant worlds can,” says Bill Kurth, research scientist at the UI and co-investigator for Waves. “Waves detected the signature emissions of the energetic particles that generate the massive auroras that encircle Jupiter’s north pole. These emissions are the strongest in the solar system. Now we are going to try to figure out where the electrons that are generating them come from.”

“If you pluck a string on a violin, the string vibrates,” he says. “The vibrating string is like the plasma itself; in the plasma it is the charged particles that are moving.”

However, we can’t hear those waves because they are at a too high frequency. So sound engineers have to “downshift” them to the audible range, creating the results we see here.

Now, he and the rest of the team want to see just how the electrons and ions are accelerated to such speeds. As these particles move along the planet’s magnetic field lines, they go faster and faster, creating stunning auroras around Jupiter. A camera aboard the spacecraft captures high-resolution views of the Jovian atmosphere to go with the sound. It also snapped the first pics of Jupiter’s north and south poles,  which are out of sight from around Earth.