A difference in vocalization in bat 'dialects' is akin to the difference between London accent and, say, a Scottish accent.

When traveling in a foreign country, it helps to learn a couple of basic words and phrases. Things like ‘I’m lost, can you help me?’ or ‘I need to see a doctor’ could prove highly useful and might even save your life. Bats seem to think so too. According to a recent study, young wild fruit bats learn to respond to the calls of different group sounds they are immersed in, even if this “dialect” isn’t the same as their own. Most often, this is a response to a “move out of my way” signal, which can be important to utter in a crowded cave environment packed with thousands of winged mammals.

The team of researchers at Tel Aviv University raised 14 bat pups with their mothers in three different chambers, with each mum giving birth and raising her young in one of the colonies. In these lab colonies, researchers played three specific subsets of natural bat vocalizations from loudspeakers. The sounds mimicked real cave roosts comprised of 300 bats and were played in different ranges of pitch.

The young bats were also, of course, exposed to their mothers’ normal ‘dialect’ which they used to communicate among themselves. At the same time, each group developed the ability to react to a dialect that resembled the cave roost they were exposed to.

“The difference between the vocalizations of the mother bat and those of the colony are akin to a London accent and, say, a Scottish accent,” Dr. Yossi Yovel of Tel Aviv University explains. “The pups heard their mothers’ ‘London’ dialect, but also heard the ‘Scottish’ dialect mimicked by many dozens of ‘Scottish’ bats. The pups eventually adopted a dialect that was more similar to the local ‘Scottish’ dialect than to the ‘London’ accent of their mothers.” 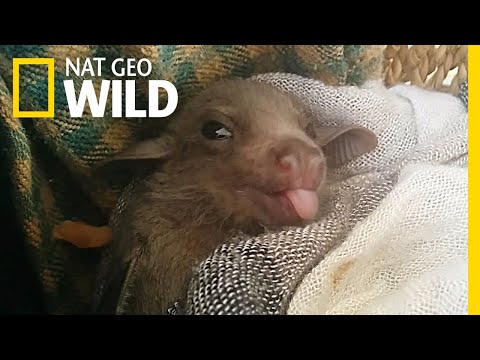 Human babies and toddlers have a fantastic ability to pick up new languages, soaking patterns and utterances like a sponge. Scientists call this ability ‘vocal learning’ and until recently it was thought to be exclusively the domain of humans and some songbirds. Other animals have been shown to use a form of vocal learning, but these were instances where the animals would mimic human sounds. The young fruit bats, on the other hand, seem capable of vocal learning among their own species, as reported in the journal PLOS Biology.

“The ability to learn vocalizations from others is extremely important for speech acquisition in humans, but it’s believed to be rare among animals,” Dr. Yovel says. “Researchers have believed that this is what makes human language unique.”

Studies on songbirds suggest that they can learn to sing from one parent. The new study, however, shows that bats tuned in and learn from an entire colony comprised of hundreds of bats. This finding is striking because it finally moves science away from the songbird-model. It also poses important evolutionary questions like whether or not vocal learning appeared independently in humans or whether it’s actually a far more primitive behavior shared among the mammalian group.

“Will they adopt the local dialect or will they be rejected by the group? Or maybe the local colony will change its dialect to adopt that of our bats,” Dr. Yovel says. “There are many interesting avenues yet to explore.”

It’s not the first time bats have surprised researchers with their complex communication. Earlier this year, the same team found that bats discuss and even argue with each other.