It's scary how lifelike this robot is.

Today’s robots are becoming increasingly agile, responsive, and, generally, lifelike. One of the most exciting demonstrations of the new wave of robotics comes from engineers at Cornell and the University of Pennsylvania, who’ve thought of a radically new way to power robots. Instead of batteries and gears, their new robot — a soft robot that mimics the lionfish — uses synthetic blood flowing through a circulatory system that provides both power and propulsion.

Of fish and robots

Most complex organisms use blood in order to distribute oxygen and energy for cells throughout the body. Some robots use hydraulic fluid to actuate motion but carry separate batteries to supply energy. Taking cues from nature, the researchers designed a robot lionfish that uses a basic vasculature and fake “blood” to both energize itself and hydraulically power its fins.

Of course, the fishbot also has batteries. However, instead of a central lithium-ion battery, this robot’s batteries are distributed throughout its body, powering two pumps — one pumping liquid in the pectoral fins and the other in the tail.

The “blood” pumped through the robot’s system is made out of electrolyte solution, enabling it to swim for up to 36 hours — about 8 times longer than a similarly built robot, but without synthetic blood. On the other hand, it is very slow, covering only one and a half body lengths per minute. It’s so slow, it would have surely gotten eaten and exterminated in the ocean. Eventually, the battery cells run out of ions, and the fluid stops circulating. At that point, you have to recharge the fluid to keep the robofish operational. 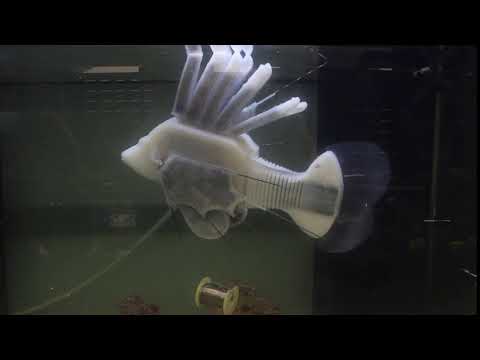 However, for a proof of concept, this is an extremely interesting design — and it will only get faster as researchers make improvements. According to the researchers, such a robot may have its place, such as in applications where machines require fluid. For instance, this sort of fake blood could be used to boost the power of electric vehicles and airplanes.

“The fabrication techniques and flexible materials used in its construction enable the vascular system to be created with complex form factors that continuously deform with the robot’s movement. This use of electrochemical energy storage in hydraulic fluids could facilitate increased energy density, autonomy, efficiency and multifunctionality in future robot designs,” the authors wrote.

The most fascinating part about this robot is how lifelike it behaves. Soon enough, the biological and synthetic might become indistinguishable. And who knows what happens after that.

The robot was described in the journal Nature.