On Wednesday, physicists will make a historical announcement.

Astronomers who are part of one of the most ambitious scientific projects in history are gearing up for a massive announcement on Wednesday. If rumors hold true, the world may soon be shown the first ever photo of a black hole’s event horizon.

Photographing an orange on the moon 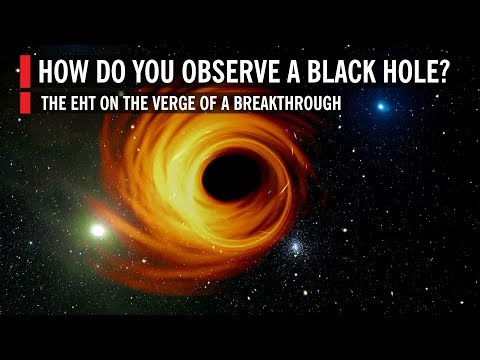 Since 2017, the Event Horizon Telescope Collaboration (EHT) has been studying two supermassive black holes, one located at the center of the Milky Way, called Sagittarius A*, the other found at the core of the supergiant elliptical galaxy Messier 87.

Black holes are the dark remnants of collapsed stars whose gravity is so intense that nothing, not even light, can escape. At the center of most galaxies lies a supermassive black hole, which can have a mass billions of times greater than that of the sun, all crammed in a relatively small volume. For instance, the supermassive black hole at the center of the Milky Way, Sagittarius A*, is about the size of the orbit of Mercury.

Because light cannot escape the gravitational pull of a black hole, it is virtually impossible to image or photograph one. However, matter and energy aggregate around the edge of a black hole, known as the event horizon. It’s this ring-shaped structure that scientists are hoping to image — and this is no trivial task.

During a press conference at last month’s South by Southwest (SXSW) festival in Austin, Texas, Sheperd Doeleman, who is the director of the Event Horizon Telescope, shared a quirky anecdote so people could relate to the kind of challenges involved in this project. He said that imaging the Milky Way’s black hole is just as difficult as spotting an orange on the surface of the moon.

In order to image an object as small as Sagittarius A* lying more than 26,000-light-years away, you need a really big telescope. In this case, the researchers turned the whole planet into a huge telescope by combining eight radio telescopes located all around the world. Using a technique called Very Long Baseline Interferometry, or VLBI, the instruments of all these observatories located thousands of miles from one another were linked to form a “virtual telescope”, whose resolving power is as big as the space between the disparate dishes. Very clever, indeed!

Wednesday news conference is expected to provide the first image of Sagittarius A* shadow on its accompanying disk of bright material.

Beyond the historical implications of such an achievement, imaging a black hole’s event horizon will also put Einstein’s theory of general relativity to its ultimate test. More than 100 years ago, Einstein’s equations predicted exactly what the size and shape of a black hole’s shadow would be. Researchers have also designed computer simulations and models that compute the shape of a black hole’s event horizon, which can be tested with the actual physical observation. So far, EHT researchers have run over 12,000 simulations of different black hole shadows that could differ from Einstein’s predictions. If there’s anything different from what general relativity predicts, theoretical physics could be up for quite the show.

“What the black hole image could do for us, if we can get it, would be to take something that is the most extreme, the strangest prediction of general relativity, one of the great accomplishments of the human mind, [and] combine it with the most advanced electronics with a planetary scale collaboration with the most advanced statistics [and] new imaging techniques,” Peter Galison, a professor at Harvard University and EHT collaborator, said at SXSW. “It’s like making a new camera with a new kind of film, a new kind of lens, combining it with other cameras, all at once, and if that could happen, if we could actually get in and see right up close to the horizon.”

Wednesday’s announcement is scheduled for 9 a.m. EDT. The National Science Foundation will provide a live stream.