Scientists may have finally solved the mystery of emerald icebergs

Iron oxide may be coloring some icebergs green, which would make them important nutrient carriers for marine life.

Icebergs normally appear white or blue as they float beautifully in the ocean’s water. Some icebergs, however, are green –and for more than a century scientists haven’t been exactly sure why this is. According to a new study, rare emerald icebergs may owe their distinctive coloring to iron oxide from Antarctica’s mainland. This means that green icebergs may be transporting key nutrients to marine organisms at the bottom of the food chain.

Icebergs are massive chunks of ice that break off of glaciers and ice shelves and run into the ocean. They form from falling snow which solidifies layer by layer, trapping air bubbles which reflect light. Normally, pure ice tends to absorb the red wavelengths of light and reflect the blue ones, which is why icebergs have a blue tint. However, the bottom layer of the iceberg, which is submerged in water, is made out of marine ice, which doesn’t have any air pockets to reflect light. As a result, capsized icebergs that have marine ice exposed at the water’s surface appear clearer and darker than regular icebergs that have just calved from an ice shelf.

In the 1980s, Stephen Warren, now a glaciologist at the University of Washington, took samples from blue and emerald icebergs and found that the green icebergs were made of marine ice. At the time, Warren thought that dissolved organic material from long-dead marine organisms must have gotten trapped in the ice as the water froze underneath the ice shelf. Organic carbon is yellow, which combined with the blue of pure ice should turn the ice green.

But subsequent experiments revealed that green marine ice had the same amount of organic material as blue marine ice — so Warren and colleagues went back to the drawing board to see what the cause is.

Decades later, Warren learned about a study performed by oceanographers at the University of Tasmania who tested ice cores from the Amery Ice Shelf. They found that marine ice near the bottom of the core had almost 500 times more iron than the glacial ice above. Iron oxide is naturally found in soil and rocks, which can grind into a fine powder when glaciers flow over the bedrock. When the ice meets the sea, this glacial flour flows into the ocean where it can get trapped in marine ice.

In a new study published in the Journal of Geophysical Research: Oceans, Warren and colleagues propose that glacial flour is responsible for creating emerald icebergs. Iron oxide tends to lend things a rusty-color, covering them in hues of yellows, oranges, reds, and browns. This hunch will have to be confirmed by experiments that sample icebergs of different colors for their iron content and light-reflecting properties.

If the theory is correct, then emerald icebergs will prove to be more than just a stunning sight — they could be an important component for local ecosystems. Iron is a key nutrient for phytoplankton, which are microscopic organisms that form the base of the marine food web. However, iron is scarce in most areas of the ocean.

“It’s like taking a package to the post office. The iceberg can deliver this iron out into the ocean far away, and then melt and deliver it to the phytoplankton that can use it as a nutrient,” Warren said in a statement. “We always thought green icebergs were just an exotic curiosity, but now we think they may actually be important.”

Emerald icebergs are amazing, but did you know about striped icebergs? Sometimes different layers of ice will solidify under different conditions, leading to an humbug-like ice mass colored in blue, green, yellow and even brown. 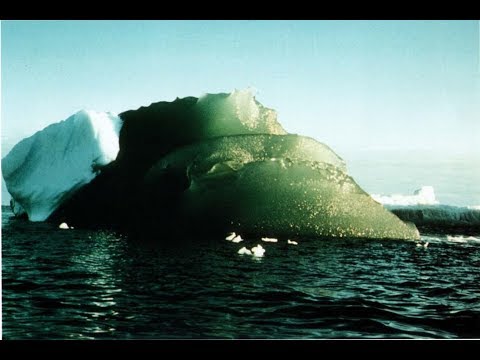