Do elephants call “human” ? African elephants make a specific alarm call in response to the danger of humans

African elephants make a specific alarm call to warn others of human-related dangers according to a new study of wild elephants in Kenya. 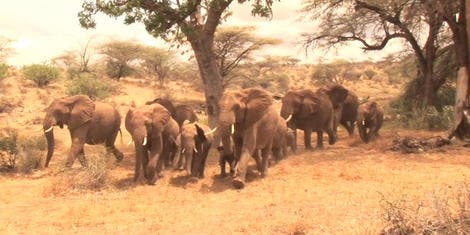 Researchers from the Oxford University Save the Elephants, and Disney’s Animal Kingdom carried out a series of audio experiments. In these experiments, recordings of the voices of the Samburu,a native tribe from the Kenya area were played to elephants, which reacted quickly, becoming much more vigilant, and running away from the sound whilst emitting a distinctive low rumble.

After the team recorded the rumble (listen to it here) and played it to other resting elephants, they reacted in pretty much the same way – becoming much more vigilant, and distancing themselves from the sound. 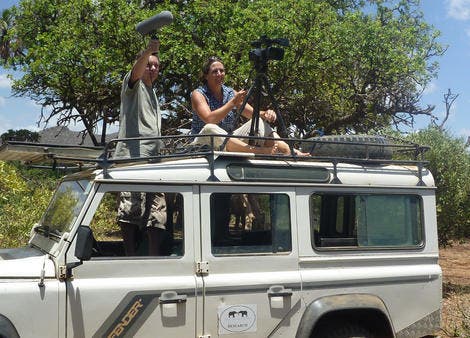 The new research, recently reported in PLOS ONE, then built on other, previous research, which showed that elephants call ‘bee-ware’ and run away from the sound of angry bees. While the two sounds may be similar for the human ear, when comparing the infrasonic frequencies, scientists clearly noticed that they are different. In other words, elephants make different sounds to warn each other of the different types of danger (in this case, bees and humans).

‘Elephants appear to be able to manipulate their vocal tract (mouth, tongue, trunk and so on) to shape the sounds of their rumbles to make different alarm calls,’ said Dr Lucy King of Save the Elephants and Oxford University who led the study with Dr Joseph Soltis, a bioacoustics expert from Disney’s Animal Kingdom, and colleagues.

However, the interpretation of the results is still a matter of debate, scientists explain.

‘We concede the possibility that these alarm calls are simply a by-product of elephants running away, that is, just an emotional response to the threat that other elephants pick up on,’ Lucy tells me. ‘On the other hand, we think it is also possible that the rumble alarms are akin to words in human language, and that elephants voluntarily and purposefully make those alarm calls to warn others about specific threats. Our research results here show that African elephant alarm calls can differentiate between two types of threat and reflect the level of urgency of that threat.’

This collaborative research, while shedding new light on animal communication, is also a part of a larger movement, which aims to reduce human-elephant conflict in Kenya. Armed with the knowledge that elephants are afraid of bees, Lucy and Save the Elephants have built scores of ‘beehive fences’ around local farms that protect precious fields from crop-raiding elephants.

‘In this way, local farmers can protect their families and livelihoods without direct conflict with elephants, and they can harvest the honey too for extra income,’ says Lucy. ‘Learning more about how elephants react to threats such as bees and humans will help us design strategies to reduce human-elephant conflict and protect people and elephants.’

Hopefully, they will be able to successfully use this new information to better understand and protect elephant populations in Kenya – and not only.