Monkeys in Brazil make stone flakes, which means some of those ancient tools might falsely be attributed to hominids

The monkeys cut the stones for a whole different reason, though. Ok, maybe they're not that smart.

by Tibi Puiu
in Anthropology, News
A A

Humans and tool use are intrinsic. There’s no way we can imagine life as a human or human ancestor, be it today in our technologically-enabled society or millions of years ago in the wilderness, without tools. Humans aren’t the only tool users in the animal kingdom, however. Ravens, chimps, and monkeys use tools too, scientists will tell you. But while these may seem impressive, hominid tool prowess is unrivaled. Or so we like to think — could we be giving ourselves too much credit?

In the Brazilian forest, a startling find made big waves among anthropologists after a team witnessed with their own eyes how a capuchin monkey turned a plain old stone into a flake — the most basic cutting tool, but one of vital importance. Some of the earliest flakes we’ve found are 3.3 million years old and, naturally, scientists attributed them to human ancestors who lived in those times, like Australopithecus afarensis or Homo habilis. In light of this recent remarkable discovery, however, we can only beg the question: Were all of those tools made by human ancestors?

Tomos Proffitt, a paleoanthropologist at Oxford University, was there when a capuchin monkey took a rock and bashed it against others. Luckily, Proffitt and colleagues caught it all on tape for the rest of us to see. When they finally descended to the site, they found 111 fragmented stones which the capuchins had dropped. Half of these fractured flakes exhibited conchoidal fracture, a feature commonly associated with hominid flake production.

Capuchin monkeys are pretty clever and you can often see them bash rocks against nuts to crack them open and enjoy their sweet kernel. But this time, the monkeys weren’t cracking nuts — they were cracking stones and in the process produced flakes that, in some respects, rival those found in Africa millions of years ago.

There’s a catch, though. The monkeys didn’t seem to have any idea what to do with the flakes once they made them. The fact that the bashed rocks ended up looking like tools seems to be coincidental. Instead, what the capuchin was after were the minerals from the quartz. These are licked and ingested, the flakes once sucked dry thrown away — or so it seems, anyway.

“While humans are not unique in making this technology, the manner in which they used them is still very different to what the monkeys seem capable of,” said co-author and leader of the Primate Archaeology (Primarch) project Michael Haslam, from the University of Oxford.

Moreover, the ancient tool flakes bear evidence of more intent than what Proffitt and colleagues found in Brazil. Ancient bones which are etched with hundreds of cut marks found in sites alongside flakes also add weight to the idea that, indeed, human ancestors were using such tools with intent millions of years ago. Proffitt, however, cautions that not all of these thousands of flakes collected so far may be made by humans.

“This does not mean that the earliest archaeological material in East Africa was not made by hominins. It does, however, raise interesting questions about the possible ways this stone tool technology developed before the earliest examples in the archaeological record appeared. It also tells us what this stone tool technology might look like. There are important questions too about the uniqueness of early hominin behaviour. These findings challenge previous ideas about the minimum level of cognitive and morphological complexity required to produce numerous conchoidal flakes,” Proffitt said. 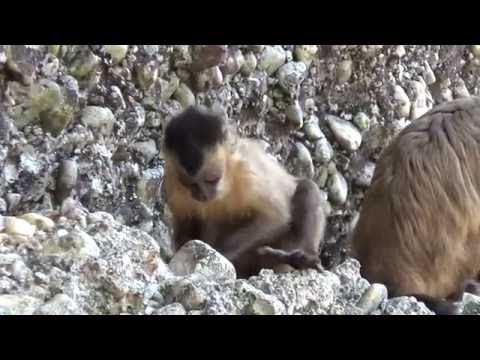 It’s not entirely clear why the capuchins do this, though. More investigations might shed some light on this question.

The findings appeared in the journal Nature.