It's called micro learning, and it might change your life.

We live in a hyperconnected world, where almost every moment of our day to day life is spent connected to the internet. While we’re waiting for the bus, we check Facebook. We Tweet while we’re calling the elevator, and we might read the news when we’re on the toilet. I’m not saying I do it but you know… it happens. But what do you do when you don’t have internet? Or during the few seconds while a new Wi-Fi is connecting? Those brief moments are just a slow wait in which you pretty much don’t do anything, right? Well, MIT researchers have another idea. They want to make you smarter, through what they call micro learning.

Scientists working at MIT’s Computer Science and Artificial Intelligence Laboratory (CSAIL) have developed a series of apps called “WaitSuite” that improves your vocabulary in a foreign language. Wait, by now you’re probably thinking “a new language learning app, so what?”. Well, the trick is, WaitSuite was designed specifically to leverage those very short moments when you aren’t doing anything, and these micro-moments can make a big difference. It’s called micro learning — remember the name, it might change your life.

“With stand-alone apps, it can be inconvenient to have to separately open them up to do a learning task,” says PhD student Carrie Cai, who leads the project. “WaitSuite is embedded directly into your existing tasks, so that you can easily learn without leaving what you were already doing.”

WaitSuite covers five common daily tasks: waiting for WiFi to connect, emails to push through, instant messages to be received, an elevator to come, or content on your phone to load. According to Cai, by using the system’s instant messaging app “WaitChatter” alone, users learned 57 words in two weeks. WaitChatter basically works while you’re expecting a reply through an Instant Message. There was also another, secondary benefit to using this: by learning new words without leaving the app, subjects were actually more focused on their primary task since they would otherwise just browse social media, or do some other kind of distracting activity. The module tends to send you words related to the conversation you are having.

“This work is really interesting because it looks to help people make use of all the small bits of wasted time they have every day” says Jaime Teevan, a principal researcher at Microsoft who was not involved in the paper. “I also like how it takes into account a person’s state of mind by, for example, giving terms to learn that relate to the conversations they are having.” 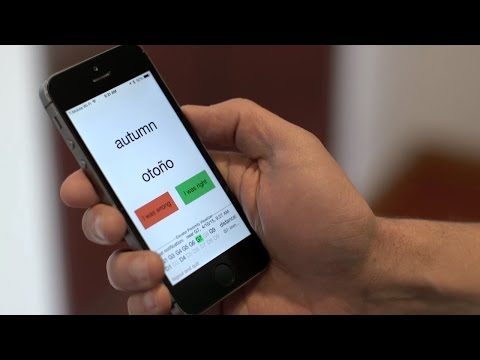 Another cool thing about WaitSuite is that you don’t actually have to run it, it starts automatically. For the other modules,  “ElevatorLearner” automatically detects when a person is near an elevator by sensing Bluetooth iBeacons and sends a word to translate and “WiFiLearner” starts when it detects that the device is seeking an internet connection. Of course, the key here is having a task that fits with the time you are waiting. For instance, people with devices which take longer to connect to the internet might be left with a few extra seconds

Although for now, the approach has just been used for learning new languages, it can be used for pretty much anything — math, formulas, medical jargon, you name it. Cai even envisions a future when WaitSuite will convince users to practice mindfulness and take a moment to relax and unwind from all the stress. Some things might prove more effective than others on the platform. In our modern lives, Micro learning seems like it has a lot of potential, so let’s make those brief moments of waiting count.

“The vast majority of people made use of multiple kinds of waiting within WaitSuite,” says Cai. “By enabling wait-learning during diverse waiting scenarios, WaitSuite gave people more opportunities to learn and practice vocabulary words.”