Is there really a mathematical formula that predicts happy relationships?

In a recent TED talk, Hannah Fry outlines a mathematical formula that predicts long-lasting relationships. In her recent book, The Mathematics of Love, she discusses the findings of psychologist John Gottman who studied hundreds of couples over many years to find out what sets apart the happy couples from the miserable. Gottman than enlisted the help of a mathematician who correlated all the data the psychologists gathered and came up with an empirical formula that seems to predict if a couple will be happy together.

by Tibi Puiu
in Mathematics, News, Psychology
Reading Time: 4 mins read
A A
Share on FacebookShare on TwitterSubmit to Reddit

In a recent TED talk,  Hannah Fry outlines a mathematical formula that predicts long-lasting relationships. In her recent book,  The Mathematics of Love, she discusses the findings of psychologist John Gottman who studied hundreds of couples over many years to find out what sets apart the happy couples from the miserable. Gottman than enlisted the help of a mathematician who correlated all the data the psychologists gathered and came up with an empirical formula that seems to predict if a couple will be happy together.

Mathematicians, maybe under an compulsion to reduce things – even human feelings – to their abstract essence, have long tried to come with a mathematical formula for love. It sounds silly, but some have actually tried with mixed reports. Enlightened analyst and geometer Alexis Clairaut may have been the first mathematician to propose a love equation in the form of the Archimedean spiral.

“We seek the curve described by the endpoint of a body, initially vertical and pointing downward, that subsequently changes in length and position,”  Clairaut writes in the IXXth century.

As the years passed, “serious” mathematicians had moved on to more tangible things, discounting any idea of a love equation as absurd. It made its way into fiction though. In Jan Patocky’s late enlightenment novel, “The Saragossa Manuscript”, we meet the so-called geometer Don Pedro Velasquez – a prototype character that mockingly or not describes the absent-minded mathematician. At one point, the lead heroine of the novel, Rebecca, asks Don Velasquez if “this movement we call love, can it be calculated?” The context of the conversation was Rebecca’s bewilderment in the face of a paradox: a man’s love diminishes with intimacy, while the woman’s increases. Velasquez, ever the keen mathematician, jumps to her aid. “I have found a very elegant proof for all problems of this kind: let X….” Hilariously, the author doesn’t let Velasquez present his proof.

More recently, in cinema, Berkeley math professor Edward Frenkel explores the same theme in the 26-minute-long “Rites of Love and Math”, a movie he wrote, directed and played the leading role. The film has only two characters, a man in the throes of an existential dilemma and the woman he loves.  In the movie, Frenkel found the mathematical formula of love. But then he realizes that others could use his formula to cause harm — and that he must die to safeguard the world. He saves the formula by etching it into his lover’s body.

Love is a complicated equation. It’s been given mathematicians, of all people, headaches for centuries. But while scientists have yet to uncover the love equation – which in all likelihood can’t exist – the same can’t be said about relationships. Empirically, at least, there seems to be a formula that predicts if a couple will be in a long-lasting, happy relationship.

“In relationships where both partners consider themselves as happy, bad behaviour is dismissed as unusual,” Fry says.

“In negative relationships, however, the situation is reversed,” writes Fry. “Bad behaviour is considered the norm.”

Gottman along with mathematician James Murray found a pattern that predicted when these trends of negativity spiral out of control. When a threshold is reached, the equation predicts a high probability of the relationship ending. 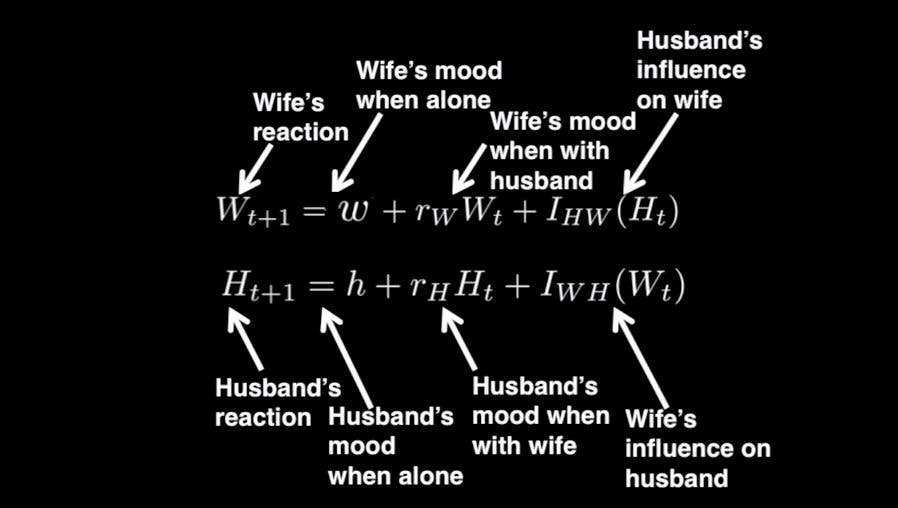 Though framed as “husband” and “wife”, it can be used to describe any couple, heterosexual or otherwise.

The most important factor that influences the well being of a couple is the mutual influence the husband and wife have on each other. The researchers found that when a husband behaves positively to his wife, like saying something nice about her or their life together, the wife will respond positively as well. In the same vein, negativity spirals into more negativity.

“The most successful relationships are the ones with a really low negativity threshold,” writes Fry. “In those relationships, couples allow each other to complain, and work together to constantly repair the tiny issues between them. In such a case, couples don’t bottle up their feelings, and little things don’t end up being blown completely out of proportion.”

In short, a happy couple will interact more often, bring up issues as they happen and work together to fix them.

“Mathematics leaves us with a positive message for our relationships,” Fry says, “reinforcing the age-old wisdom that you really shouldn’t let the sun go down on your anger.”

But is this all it boils down to when discussing happy relationships? Of course not, but, like Fry says, it gives to show at least just how important managing anger and negativity can be. A happy, long-lasting relationship is based on mutual support, understanding and, least not, love. The latter might never be explained in the form of an equation or variable of some sort.